Case maker LifeProof has announced two new additions to its popular case line, both of which are compatible with Samsung’s latest flagship device: the Samsung Galaxy S4.

The first case in the new Galaxy S4 compatible line-up, the LifeProof nuud Galaxy S4, offers much of the same profile that users get with the nuud Samsung Galaxy S3. That includes the company’s drop protection for falls of up to 6.6 feet, water resistance for up to 6.6 feet and clear rear-facing and front-facing shell. That clear shell allows users to still showcase the color of their device, while protecting the particularly fragile Galaxy S4 from dirt, dust snow and ice. Although the case does nearly completely encapsulate the Galaxy S4, users shouldn’t have a problem accessing its buttons and jacks. The LifeProof nuud, will debut at $89.99.

For $79.99,  Galaxy S4 fre case allows users to protect their investment completely, thanks to a built-in screen protector. That’s in addition to the case also being fully submersible in water for 6.6 feet, and rated for drops as high as 6.6 feet. Users can still show off the color of their phone with the rear-case window and it too allows users access to the headphone jack and USB port of the Galaxy S4 without any trouble. 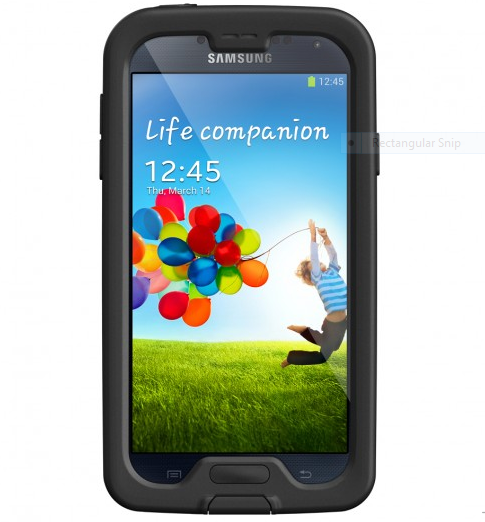 The nuud and fre cases for the Samsung Galaxy S4 are nearly identical, except for the nuud’s lack of a screen protector.

As for looks and functionality, both cases mirror the LifeProof nuud Galaxy S3 case GottaBeMobile reviewed last month. We found the case to be particularly well made, going so far as to declare it the “best Galaxy S3 waterproof case we’ve tried.”

While users can’t purchase either of the cases just yet, they can sign up to receive an email alert from LifeProof the moment the cases are available. A press release made available to GottaBeMobile indicated that users should expect each case to go on sale this month.

Although some users might balk at both cases’ price tags, it’s likely that they will thank themselves for making the large investment should they ever drop their device in water or on a hard surface. The Galaxy S4 is legendary for providing small software based features meant to enhance user’s lives, however most users would agree that its somewhat flimsy back and plastic edges mean the phone is very susceptible to trauma.