LifeProof CEO Gary Raynor showed off a waterproof iPad case that does not obstruct the tablet’s display at IFA 2012 in Berlin. The ruggedized case looks very promising and we expect those who work or play with their iPads outdoors will appreciate the LifeProof Nüüd iPad case.

At $159 the LifeProof Nüüd is pricey, but investing that kind of cash sure beats a water-logged iPad, especially if you’ve got one of the more expensive models and are rough on it.

Raynor showed off the Nüüd case at the Showstoppers event at IFA 2012. As you can see in the video the case does indeed waterproof and he isn’t afraid of dunking his personal iPad in a water tank to prove the point. One thing we love about LifeProof’s products is that they don’t add that much thickness. Some competitive products are quite bulky.

So how does the Nüüd case protect the iPad from water damage if it doesn’t even cover the screen? Well, the iPad’s display is actually waterproof. The case has a gasket that’s held tightly against the edge of the iPad’s display. The 30-pin port, speaker and headphone jack are sealed off from water as well. All the buttons and the mute/screen rotation toggle are usable with the Nüüd case installed. 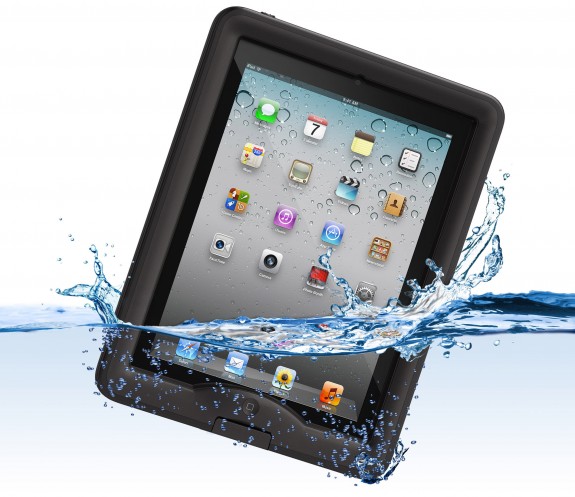 There is a removable display shield included in the $159 bundle to protect the iPad’s screen when it’s not in use.

LifeProof is best known for its slim waterproof iPhone case. Raynor also showed us a couple of accessories that work with the iPhone case for added convenience and protection. A LifeProof armband is tailored for athletes such as runners and surfers. An orange floater that wraps around the iPhone case  keeps it from sinking in case it’s dropped in water. Raynor said the combination of the floater and the LIfeProof case can help an iPhone survive drops off the top of a five story building.

Raynor said that LifeProof cases don’t only save Apple devices, but have actually saved human lives. He recounted an incident off the California coast that involved a LifeProof case owner. A boat capsized with two iPhone owners on board. One of the iPhones stopped working immediately, but the one with the LifeProof case survived and was used to call the coast guard for help.

We’ll tell you more about the LifeProof Nüüd case as the company provided a review sample.

LifeProof put together a promo video to hammer home the message, which is well done, but doesn’t do much to explain what’s being advertised.