There are a handful of brands that sell Apple Lightning cables for the iPhone and iPad, but there are also a ton of knock-off brands that make lookalike cables that are very cheaply made. Usually, you can tell the difference between real Lightning cables and knock-offs, but cheap brands are getting better at making their knock-off cables look more genuine than ever.

One Reddit user bought a few Lightning cables off of eBay that were marked as genuine OEM, but upon teardown and inspection, the cables were actually cheap knock-offs. In the photo he posted, the Lightning connector looks as genuine as it could get, but the teardown revealed a very cheap and shoddy chip on the inside that made it a dead giveaway.

Many users think that they’re getting a great deal by buying these knock-off cables for $5 a piece, but what they’re really buying are crappy cables that will probably fail within a few months and could pose a safety risk as they can’t charge iOS device as efficiently as genuine cables can. 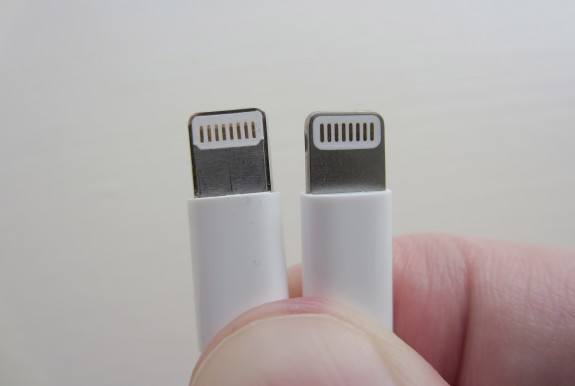 The clearest difference in most knock-off cables is that the genuine Lightning cable will have the white piece inside of the metal connector perfectly rounded in the corners, while the fake one will most likely be squared off somewhat. Furthermore, the entire metal piece of the genuine connector is one single metal piece, while the knockoff is made out of several metal pieces cheaply pressed together.

Knock-off brands have gotten better at this, though, and the difference between the connectors is getting slimmer and slimmer, which means you’ll have to be extra careful when buying cables at places besides the Apple Store.

As for the USB plug, the white plastic housings are practically identical to one another, which can make it difficult to differentiate the two just by glancing at it. However, the differences lie in the details.

Knock-off cables will have metal USB connectors that are a lot more grainy than the genuine one, which will have perfectly smooth metal plates. This most likely has something to do with the type of metal that the USB plugs are made out of; it’s more than likely that the knock-off cable uses a cheaper metal or manufacturing process to make the plug, thus leaving a rough, grainy surface to the metal. 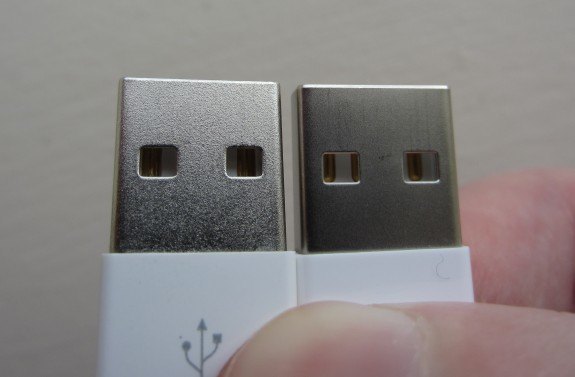 The next time you go out and buy a cable, look for these signs to make sure you’re buying a real, genuine Apple Lightning cable. Of course, going straight to an Apple Store or ordering one on Apple’s website will guarantee that you get a real Lightning cable, but if you’re wanting to save a little cash, you’ll definitely want to be cautious when you go out hunting for deals.

Amazon and MonoPrice are two great places to get genuine Lightning cables at a cheaper price than what Apple sells them for. You can get them for $13 each on Amazon and $12 each on MonoPrice, but you can’t beat the free two-day shipping with Amazon Prime, so we tend to lean more toward Amazon in this case.