I make a Starbucks run once a week, plus an occasional weekend stop, and fortunately this week’s run landed on the morning after Starbucks updated their iOS app with Passbook support. Let me tell you, as convenient as the app is, it’s got nothing on Passbook.

How it went down

After installing the update last night and going through the Passbook settings, I stopped at one of the three Starbucks locations on my way to work (keep in mind, my commute is about ten minutes) and was greeted with this notification on my iPhone’s lock screen. 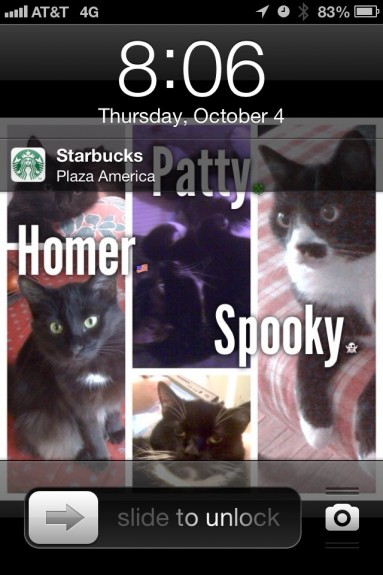 No need to unlock then tap the app or Passbook. No need to say “Starbucks” or “Passbook” to Siri. Just arrive at the Starbucks and unlock directly to the pass, which looks like this… 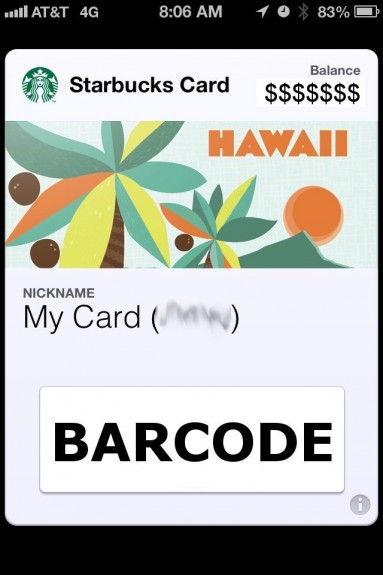 Starbucks pass. The pass on your screen will show the actual barcode and dollar value.

Fun feature: as it does in the app, the Starbucks pass uses the graphic from the physical card associated with the account. I use a gift card from my mom as my primary, but this can be changed by adding a new card to the app then adding it to Passbook.

After being updated, the Starbucks app gave me a one-time prompt to add a card to Passbook when I launched it. But adding cards to Passbook can be done anytime. Just tap on Manage in the card view and then Add Card to Passbook. 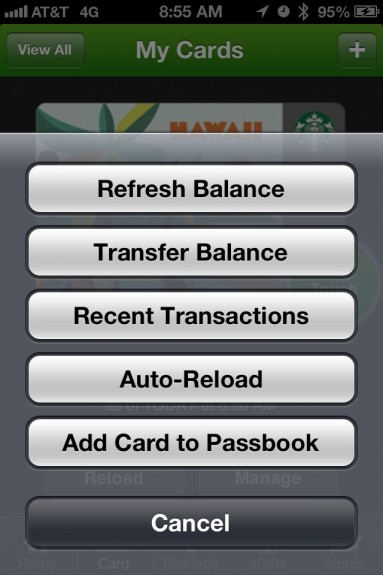 Also in the Starbucks app, if you want the Passbook notification to pop up when you reach a store location, you’ll need to “star” locations as favorites. Up to ten are allowed, which may be a problem for urban dwellers. I live in a suburban forest and am in range of ten locations. For any other locations, you’ll need to launch the Passbook manually (or verbally). 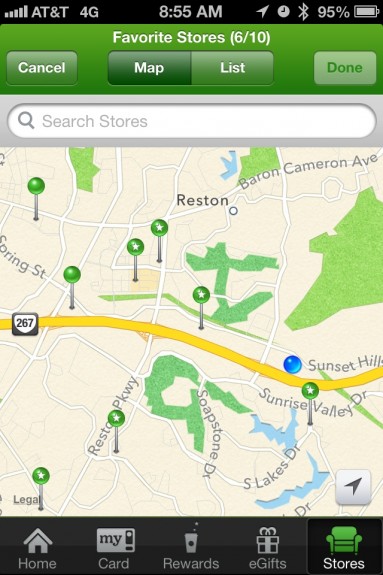 Additional setting are located in the pass itself. You can choose whether it receives automatic updates or shows on the lock screen. It states the lock screen setting can be based on time or location, but in this case, it’s based only on location with the trigger favorites listed below. The pass can be “shredded” from here. If you trash it accidentally, it can always be recreated from the app. 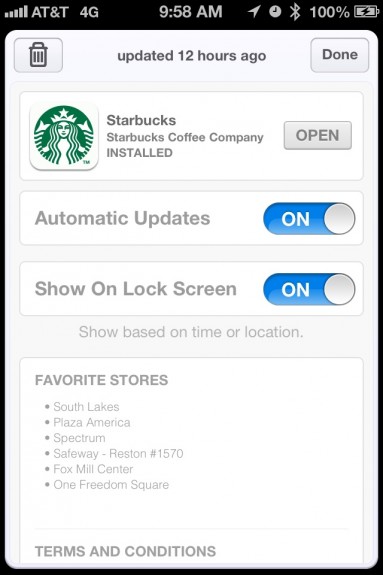 Unlike the app, there is no separate passcode setting in the pass. Security depends on your iPhone lock settings. However, you cannot add value to the pass from the pass; this must be done through the app (so definitely passcode protect that). Still, spending your Starbucks balance is hardly the worst thing someone can do if they snatch your unlocked iPhone.

After the initial setup process, it isn’t necessary to go back and forth between the pass and the app very often. The app is only needed to manage favorite stores and add value to the card (and Starbucks offers other ways to add value to a card too). If your card has value, the pass works straight from Passbook.

Prior to this update, I’d been getting used to launching the Starbucks app through Siri, but I admit, skipping even that little bit of effort is surprisingly convenient. And for any location outside my favorites, my only extra step is to say “Passbook” first. For me, the experience couldn’t be easier. This is how Passbook passes should work.