Security cameras at a clothing store in England caught a man reaching into a stroller to take an iPhone away form a 20 month old baby.

The child’s mother handed her the iPhone to watch Barney while she shopped for clothing, something that’s not out of the ordinary with so many apps and videos for kids.

The Sun reports that a man followed the pair into the store, waited for the mother to turn away from her child and reached in to steal the iPhone.

A security camera caught the man taking the iPhone from a baby, and it was as easy as taking candy from a baby. 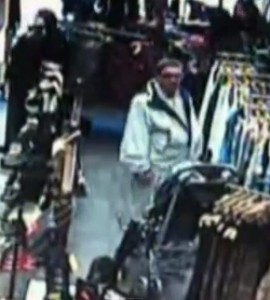 Man caught stealing an iPhone from a baby on camera.

Stolen iPhones are nothing new, but many are surprised to see an older man in glasses steal an iPhone from a child.

Police are currently looking for the man and a possible female accomplice. There’s no word on whether the users was able to use Find My iPhone in an attempt to find the stolen device.

In New York, Police Commissioner Ray Kelly blames rising crime rates on the iPhone, citing 11,447 Apple products stolen in New York City so far this year. That’s an increase in stolen Apple gadgets of 40%, and according to Kelly, a factor in the 4% overall growth in New York City’s crime rate.

New York City Police are working together with the public to register iPhones as part of Operation ID. As part of the program, users can provide their name, contact information and the serial number so that police can help track down stolen phones.

Police were on hand to help set up Find My iPhone, a free location tracking service, during the iPhone 5 launch in New York city.