According to a post on the Windows Phone Blog, LinkedIn 1.5 brings with it the ability to received automatic notifications on the application’s Live Tile in addition to offering users multiple tile sizes to choose from, and the ability to update the user’s lock screen with images of what’s happened lately to a user’s linked in connections. 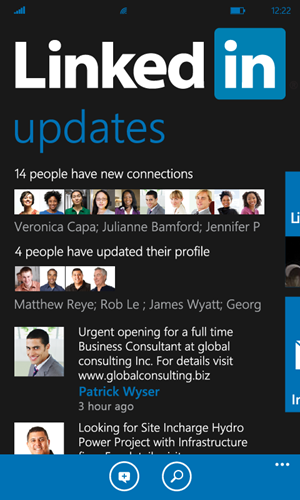 This update will also introduce speech integration. Using Microsoft’s TellMe service, the app will allow users to navigate the entire application without having to touch anything other than their device’s “Start” button. For example, users could say “LinkedIn, new status”, and then use tell me to compose a status update and post it on the social network.

This version of LinkedIn will also include support for more countries. Until now LinkedIn, had only supported English. With this update supported languages will now include users who read Spanish, French, Chinese, and German.

Read: Wikipedia App for Windows Phone named The Next App Star by Microsoft

This update is the latest in a series of updates designed to improve how applications already available for Windows Phone users play to the strengths of the operating system.

Though Microsoft has 45 of the top 50 most used applications, many of the high-profile applications don’t take advantage of things like Live Tiles, built-in speech support, or in many cases Windows Phone’s unique Metro interface. The recently available Vibr, an app for placing and receiving voice calls and messages, also introduced support for Windows Phone’s Live Tiles and lock screen notifications.

In order to maintain the Windows Phone Store’s momentum, Microsoft will need to continue to encourage app developers to improve the apps they’ve made available and not abandon them. For example, Netflix for Windows Phone hasn’t received much in the way of updates since it first came to the platform. Since it’s debut only support for closed captioning and Windows Phone 8’s new screen sizes has been added. The app currently offers no support for Live Tiles, speech, lockscreen, toasts, or fast resume.

Microsoft has been encouraging app developers to create more Windows Phone-centric applications right out of the gate. The company recently finished its Next App Star contest, of which Wikipedia walked away with the grand prize, mostly for taking advantage of the things that make Windows Phone unique.