The Little Hand Doctor – Kids Games app shot to the top of the free iPhone games chart overnight, but this free game goes overboard on ads and and in app purchases in a way no kids game should.

When opening Little Hand Doctor kids will see two ads before the game can actually be played, with ads coming so close that sometimes they double up. Once kids make it past the ads to the game, every tap is tempting an in app purchase with no clear price shown before asking for a password or Touch ID. 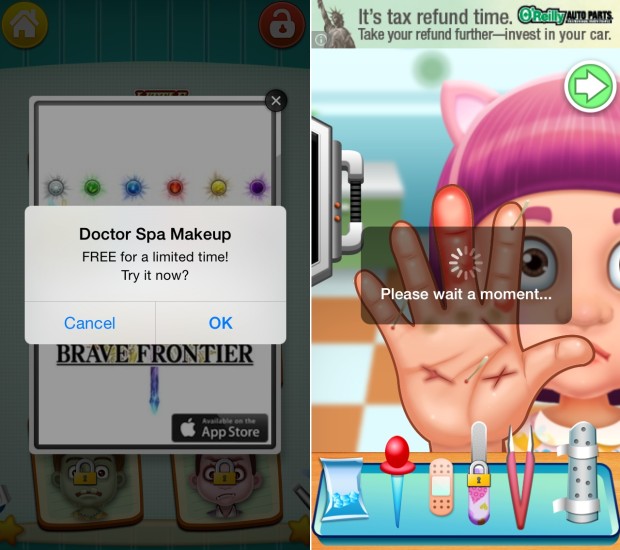 Little Hand Doctor is full of ads and in app purchases.

According to the Little Hand Doctor description on iTunes, users can spend $2.99 to unlock all the tools, $2.99 to unlock all patients or $4.99 to unlock everything. While these prices are not obscene like some games, tapping on tools without initiating an in app purchase is tough for a 30-year-old, which means kids are going to be even more likely to tap their way to unintended purchases or at the very least interrupted gaming.

This is not the only iPhone app that pushes ads and in app purchases. While most of the iPhone apps we come across use purchases and ads in a respectable manner, there are also guides to getting more money from in app purchases through decoy effect, to manage the difficulty of levels and more.

As it stands there is a 15 minute window before a password is required. Apple did not originally warn users about this time period, which would allow a child to rack up in app purchases in a game like this right after the parent approved the installation. In iOS 7.1 there is now a small pop up that warns a user that the password is good for 15 minutes.

There is no option to turn that off, but it is possible to turn off in app purchases in the iOS 7 and iOS 7.1 settings. This is a small step to securing the device, but it requires the parent to turn this on and off anytime they want to make a legitimate in app purchase.  Here’s how to set up parental controls to block in app purchases.