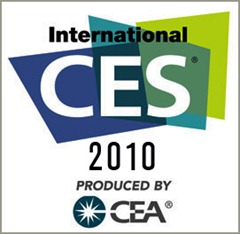 I just landed in Las Vegas for CES 2010 and am settling in for a week of gadget overload. It’s a very exciting time of the year and I hope the show brings at least a few genuine surprises. GottaBeMobile’s Sumocat and his tablet will be flying into Las Vegas tomorrow to hunt down any device with digitizer or touch. Amy Zunk and Josh Smith are also coming to Vegas to write for Notebooks.com. The rest of the GBM and Notebooks.com gang will be covering the show remotely. Needless to say, we expect to generate quite a few articles and videos while we’re here.

We’ll be attending the usual press conferences, checking out showcase events and walking the show floor. Like most conferences the real fun stuff happens in the hallways and side rooms when we meet up with fellow geeks and bloggers informally.

Like last year, I expect a lot of the products and “innovation” to be incremental. But every year there’s are some products that become real hits. For example, Novatel announced the MiFi at CES last year and it’s something that’s changed the way a lot of us use the mobile web.

Las Vegas isn’t exactly the cheapest city in the world to hang out in, but thankfully our friends over at Lenovo are picking up a chunk of expenses in exchange for us giving GBM and Notebooks.com readers a few computers. We’re going have three separate giveaways during CES, but we’re not allowed to tell you quite yet what the prizes are as not all of them have been officially announced. We’ll post more details and let us know in the comments if you’ve had your eyes on any particular ThinkPads or IdeaPads.

While Lenovo is helping shelter our small band of geeks, ScottEVest is helping to clothe us in exchange for giving our readers a bunch of ScottEVest gear. Last year my SeV 5.0 was a hit with fellow bloggers and from what I hear a lot of folks will be wearing them this year after watching Rob Bushway’s video of me unpacking my SeV at CES 2009. Today I packed my ScottEVest travel jacket full of gear since I was only allowed one carry-on bag. The pockets were big enough to fit my HP Envy 13, iPhone, MiFi, a 50mm Nikon lens, Canon S90, Ultimate Ears 5vi headphones,wallet, keys and a portable backup drive.  If you’d like a SeV of your own stay tuned as we’re having three separate giveaways for the SeV gear.

We haven’t completely finalized how we’ll be choosing winners for the ThinkPad, IdeaPads and SeV gear, but at least some of them will be rapid fire. If you want to get a jump on the competition, be sure check back here regularly through January 10. We will be using Twitter for at least some of the giveaways, so be sure to follow GottaBeMobile, NotebooksCom, ScottEVest and LenovoSocial.

We look forward to sharing our experiences at the show with you. Please let us know if you hear of any gadgets or computers you think we should take a closer look at.