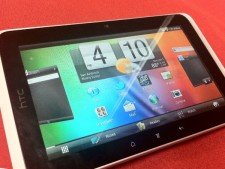 During my live, as in ongoing and on-the-job, review of the HTC Flyer, mobility and portability were vital to getting my job done. I was in the air and on the move for hours at time. Would the Flyer be up for it? Could I carry and use it comfortably? Would Wi-Fi be enough? I say “yes” with caveats.

I’ve read and heard from several camps on the topic of mobility and portability of tablets over the years. With the current generation of tablets, much of the discussion is on whether 7″ is any better than 10″ when it comes to mobility. Neither can fit in your pants pocket, so some argue the size difference is irrelevant for mobility. Others admit that but insist that smaller tablets deserve an edge for being easier to pull from a bag or carrier. My view is, if it won’t fit in your pocket, get a bigger pocket. 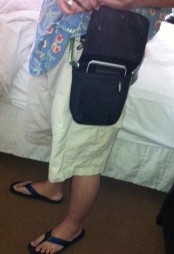 This is my gadget satchel. Technically, it’s a travel bag with sections for ID and whatnot. The top flap is held down magnetically. No zippers, snaps or velcro, so it lifts easily to access whatever’s in the main pocket, such as a 7″ tablet.

The Flyer sticks out of the pocket a bit, but the flap still covers it properly. It never seemed to push its way out while walking or sitting. The satchel clips to my belt loops (though it’s designed for a strap), so it acts much like a big add-on pocket. If it were a little deeper, it would be perfect for 7″ tablets like the Flyer. I’ve considered this approach for an iPad and other tablets in the 10″ range, and I feel they are too big to work as well unless the bag was carried by a strap, in which case it would feel like a purse, not a big pocket.

The satchel has an added benefit for the Flyer: a zipper pocket in the top flap that can hold the pen. Again, while the Flyer’s software treats the pen as an integral element, the hardware treats it as an add-on with neither garage nor tether. That pocket came in really handy for those times when I did not have a shirt pocket. Another pocket carried the USB cable I needed for transferring video and photos.

For 7″ tablets in general and the Flyer in particular, I think a dedicated wearable carrying case is a great approach. I used the Flyer as a pocketable device throughout the event, pulling it out to record video/photos and jot down notes. A secure place to hold the pen was a comfort. I think tablet makers need to get more involved with the design, if not production, of accessories for their devices. Potential customers are questioning how they will carry these things around. It would be helpful to have a custom-made answer for them.

Carried in hand, the Flyer is gripped at the top knuckle on each finger and thumb. It’s a bit of a stretch, but not uncomfortably so. Held in one hand for control with the other, I adopted a looser variant of that grip for portrait and a bracing grip on top, bottom, side and back for landscape. That last one looks awkward, but it felt natural to me. Two-handed grip at the sides was easy. Interestingly, the Flyer has a lip along the bottom short edge that helped my grip there in landscape, but not on the opposite side.

One thing that got in my way were the bezel buttons. These buttons are touch-sensitive and flip between the two bottom edges of the Flyer when flipping between portrait and landscape. They’re out of the way when I grip the Flyer normally, but the wrong position or tilt would put the home or back button right under my thumb. I think their extreme sensitivity to touch and movement offset the convenience of having them always being at the bottom. HTC could have gone less fancy here and stuck with a row of regular buttons.

My usage for the week consisted of chunks of activity and downtime. We had Wi-Fi at the event, to which I kept connected at all times, but I wasn’t working it heavily. Primarily email, Twitter, and sync to Evernote. In that situation, with that type of usage, the Flyer lasted 12-hour days with plenty of battery life to spare. Overnight charging was all I needed. Based on the rate of discharge I saw, I think constant use of the video camera or streaming video could drain the battery before the day is up. Short of that, I think it is reasonable to expect more than a full eight-hour work day of regular usage.

The Flyer, like most Android devices, functions at its fullest when connected to the Internet. However, its built-in wireless connectivity is limited to Wi-Fi, no mobile broadband (3G/4G) option. Unless you intend to use it primarily within range of a fixed Wi-Fi hotspot, I strongly recommend pairing the Flyer with a mobile hotspot or smartphone with hotspot connectivity, or waiting for a 3G/4g version. It functions fine without connectivity for things like note-taking and recording video, but feels constrained without access to email and social media.

Overall, the Flyer proved to be a truly mobile device during my time in San Antonio. Again though, that was helped by the convenience of my gadget satchel, and I did feel that connectivity constraint when I wasn’t working because I chose not to spring for a mobile hotspot solution. Anyone interested in the Flyer should consider these factors and possible solutions before buying. And it wouldn’t hurt HTC to offer their own solutions to these issues.

BTW, this concludes the “live” portion of my review. Honestly, it was a lot less live than I’d intended, but life rarely follows ones intentions. I’ll be following this up with a look at pen and general usages.