Living the Life of a Mobile Nomad

I’m a few days into the life of being a mobile nomad, which is a nicer way of saying that between now and some point in April I’ll be homeless. Technically not homeless, but we’ll be living out of suitcases, hotel rooms, and the like while our home in Chicago is undergoing a major tear out and rebuild after some flood damage from a broken water pipe on the floor above us earlier this winter.

These nomadic travels have already found us leaving Chicago to head to Washington DC and its Virginia suburbs. For the next few days we are on the Gulf Coast of Florida in the Ft. Myers area. We’ll be heading back to the DC area this weekend. Then we brave our way back to the frozen climes of Chicago before I head to the mighty Mississippi and Rock Island, Illinois for some work at the Circa 21 Dinner Playhouse for the month of March. For most of our Chicago stay we’ll be in a hotel while the work is being done on our condo. If completed on time, we should be back in our home by mid-April. We’re not counting on that. 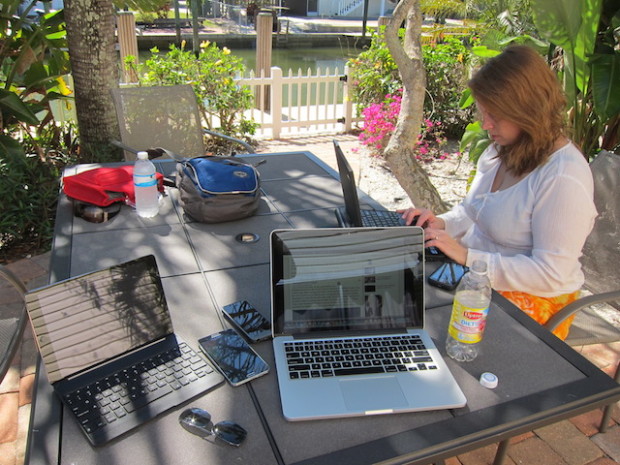 This comes after a two week trip back at the first of the year to visit my wife who was working in DC from December until this past weekend. And before departing on this trip of trips, my 2010 MacBook Pro finally gave up the ghost. I picked up a new Retina MacBook Pro 13 inch two days before leaving. Fortunately, these days it is so much easier to set up a new device than it used to be. A few hours late at night before departing for DC and I had everything up and running thanks to the Cloud and the various services I use. Our arsenal of devices on this trip includes the new Retina MacBook Pro 13, a Lenovo ThinkPad X200, an iPad Air, an iPad mini with Retina Display, an iPad mini, an iPhone 5s, a Samsung Galaxy Note 3, a Surface 2,    a Motorola Photon LTE, and a Kindle Paperwhite. No we don’t use them all every day and if I didn’t blog here I wouldn’t have as many of those devices.

It’s far easier to be nomadic than it used to be thanks to mobile devices, cellular connections and Cloud services. But there are still some gotchas that seem to rise up when you don’t need them to.

The gotcha that gets you the most is of course connectivity. Thankfully the areas we are in have good cellular coverage from AT&T, Verizon, Sprint and T-Mobile (that covers the range of devices we use.) But the better coverage gets the more you find yourself depending on it, much like any other public utility. Of course broadband providers are not public utilities, but perhaps they should be. It’s frustrating when you’re traveling along a major interstate to find that you have no coverage. Put another way, the expectation of connectivity has reached a point that we find it dismaying when it isn’t available. First world problem? Perhaps. 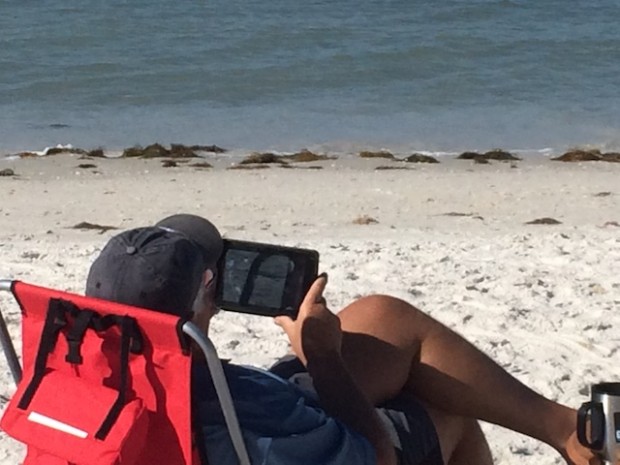 An anonymous beach goer does some Tablet reading.

WiFi connections are also proliferating, but I find that you’re sometimes at the mercy of the router hardware a given hotspot has chosen. Most work just fine, but others (that are most likely older hardware) have difficulty talking to some devices in our arsenal. Of course the Thinkpad has an older radio so that might account for those issues, but I’m also seeing the Surface 2 have issues connecting at times as well. Again, the expectation game comes into play.

Battery life is less and less of an issue these days, thought I do notice that on long drives (we do most of our traveling in a car) battery life will be much better if you turn off WiFi. Having your device try to connect to signals as you head down the road eats into your battery life. Unfortunately turning WiFi off doesn’t do much good for WiFi assisted GPS. So there’s a friction point there if you use those services.

The nightly charging routine is one that in our case requires discipline and can turn small living quarters into a nest of charging cables.  Driving during sunny days and using a device as a GPS can be a hazard in our small car even in cold weather. A plugged into power  smartphone running GPS will heat up on its own, but in direct sunlight it can overheat if you’re not careful. Our small Honda Fit is a glass bubble on wheels. We don’t have a car with an included navigation system so we rely on our smartphones while driving.

Truck stops are welcome oasis on long trips. Typically they provide WiFi connections and places to sit and get some work done. So they are usually our choice for fueling up both the car and ourselves.

We’re dreading the vagaries of hotel WiFi once we get back to Chicago and are prepared to look into other options if we can’t keep a solid connection. That may change our entire device scenario given that my wife will be in the hotel suite while I am away in Rock Island.

For the month of February we’re traveling together, but we spent most of December and January in separate towns, and will spend most of March apart. We’ve been using FaceTime audio and FaceTime video quite a bit to communicate when possible. This allows us to keep our smartphone calling packages with lower call minutes. Yeah, we do actually talk on the phone.

This promises to be a trying couple of months ahead while we’re living the life of mobile nomads. We’re hoping at least the connected part of our lives cooperates when and if we need it to.