With Logitech’s new Harmony Ultimate Hub, iPhone users will now have another way to control their television and home audio equipment with their iPhone.

The Harmony Ultimate Hub will allow users to use Apple’s iPhone to control their television, much like users of the Samsung Galaxy S4 and HTC One can do, without the use of external accessories. Instead of relying on a built-in infrared sensor, iPhone users can simply load the free Harmony application from the iTunes Store. The application will then relay their remote presses from the iPhone to the hub itself, and the hub to the device they are trying to control 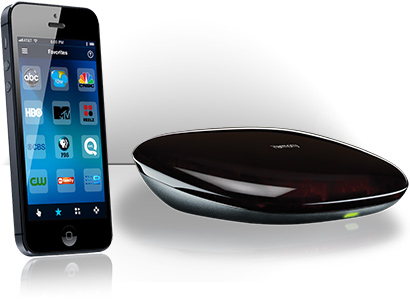 The application will support gestures for adjusting volume and channels. Logitech says that the Harmony mobile application will be compatible with 225,000 entertainment devices and will use a Smart State technology to remember the settings that the user prefers.

In addition to controlling home audio equipment and television sets the device can also control Netflix and Hulu video streaming applications on each of the most popular video game consoles that might be in their living room. That includes the Xbox 360, PlayStation 3 and Nintendo Wii.

Logitech says the Ultimate Hub will be available for users to purchase in the United States and Europe this August for $99.99. The system will also be compatible with Android devices as well, however there’s no indication that it will be made available on Windows Phone or BlackBerry OS.

Read: $50 Gadget Turns the iPhone Into a Universal Remote

Until Apple adds an infrared emitter to the iPhone users will have to contend with third party solutions like this to control their television sets. It’s rumored that Google will add support for infrared receivers into its Android operating system.

Griffin recently announced that its Beacon universal remote solution would be compatible with both Android and iPhone devices for $50. That device will cost users $69.99.