Today Logitech announced a new version of its popular Ultrathin Keyboard for the 7.9-inch iPad mini.

The smaller size of the iPad mini means the Logitech Ultrathin Keyboard mini has a smaller keyboard than the version for the 9.7-inch iPad. Logitech claims it can still deliver a comfortable typing experience on the smaller device, however. The keyboard itself looks reminiscent of the reduced keyboards that were found on netbooks a few years ago.

Unfortunately the Ultrathin Keyboard mini only has one angle for the iPad mini. While the cover is useful for watching movies on the 7.9-inch tablet, it’s not ideal because users can’t adjust their viewing angle. That’s the trade-off for having such a thin and light keyboard cover. 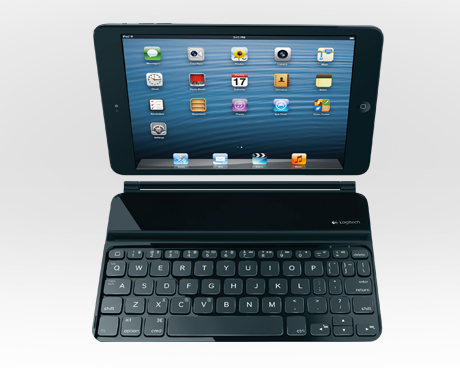 The keyboard on the Ultrathin Keyboard mini includes several iOS shortcuts so users can quickly access parts of their tablets. Those keys include a key to launch Spotlight, media controls, brightness controls and a home button. Like other BLuetooth keyboards for the iPad mini it also support shortcuts such as copy and paste.

Logitech claims the Ultrathin Keyboard mini will last for three months on a single battery charge, based on an average of two hours of typing each day. For many users that means it will likely last longer than three months.

The Logitech Ultrathin Keyboard is available for pre-order now for $79.99. Logitech hasn’t announced a shipping date yet.