On the day of the launch of the iPhone 5s worldwide, we’re beginning to see major shortages of Apple’s flagship phones in Asia and Europe where the phone has already launched ahead of commercial availability in the U.S. due to time zone differences. Launches in Australia, Asia, and various western European countries signify that the gold model is in short supply and overall, inventory levels for all iPhone 5s models may be low.

Observing sales so far, U.S. customers who want to avoid a long shipping delay online–as their international counterparts are already experiencing–may want to camp out in line at an Apple retail store or at a store that sells the iPhone–Best Buy, Radio Shack, Target, WalMart, AT&T, Sprint, T-Mobile, and Verizon to name a few–if they want to be the first to get the iPhone 5s on launch day.

Already, in Hong Kong and Singapore, the delay is now stretching into October for when the phones will ship for customers ordering through their local Apple online stores.

Customers in Australia, China, France, Germany, and the UK are now noticing that the phones will not be available to ship for another 7 to 10 business days, or roughly a two-week wait.

The gold model seems especially hard to come by in Australia. On debut, it appears a number of retailers are noting that they won’t have the new iPhone 5s in the new color tone for two to three weeks. 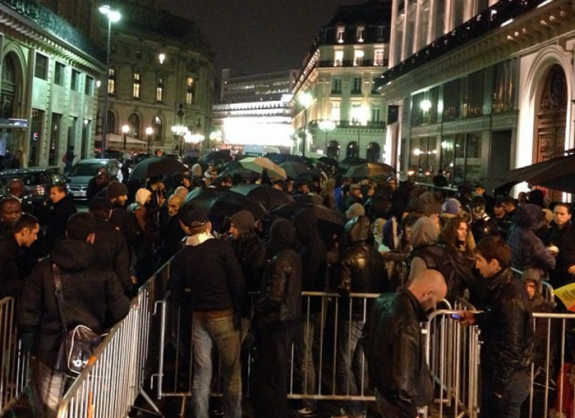 Image via 9to5 Mac

And as to physical Apple retail stores, those are expected to open at 8 AM local time on Friday, September 20th, in the U.S. Already, there are people forming lines at those stores. Worldwide, there have been massive lines at Apple retail stores as this is the first time in a number of years where Apple isn’t offering a pre-order period for the phone. Customers will have to order online at midnight local time or head to a store to pick up their phones for the Friday launch.