Yesterday Apple opened up the world of touch to all of those who use iPods but don’t want an iPhone by adding the iPod Touch to their new and refreshed iPod lineup. The iPod Touch is essentially an iPhone without the phone. While I personally think it is good news that more and more users will be using touch as a method of interaction, the real news in yesterday’s announcement was about WiFi. In Steve Jobs’ quest to conquer the world (Dave Winer says that it is Steve Jobs’ world we just live in it) Apple also introduced the iTunes WiFi Music Store which will allow iPod Touch and iPhone users to purchase songs over WiFi. While the music you purchase will eventually sync back to your PC when you dock up, the fact that this now breaks the “have to sync to your computer mode” is a big step for those who like their mobile entertainment on the go. From early reads, it doesn’t look absolutely perfect and seamless yet, but I think Apple has taken a giant step here, and in one move, fired a really loud shot across the respective bows of Microsoft, Hollywood, and the Telcos. 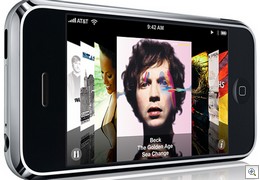 Some other interesting commentary from some UMPC bloggers on the Apple news: