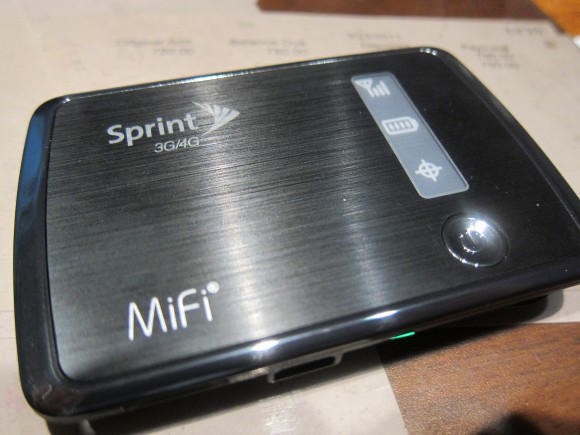 Well this just arrived. It’s the new Sprint MiFi 3G/4G Mobile Hotspot from Novatel. I ordered it right after the went on sale and I’m looking very much forward to checking it out. I’ve been a big MiFi user for quite some time with the earlier Sprint model. It works well when I travel, especially with my wife, because we always have multiple devices going when that’s the case. Otherwise the MiFi has been an expensive backup in case the other wireless (in most cases Comcast) goes kaflooie.

Now, here’s the rub. The closest 4G service in my area is in the Washington DC suburbs. That means I’ll need to take a trip to check out the supposedly blazing speeds Sprint’s flavor of 4G (WiMAX) offers.
So, why did I pick up a 3G/4G card this early on. Well, in other areas I travel to (Richmond, VA, Chicago, DC,) 4G coverage exists. When I travel to those locations the original MiFi card has been my lifeline. So, theoretically I’ll be getting good use of the 4G connection when I do travel. Eventually (probably about the time we start hearing things about 6G) 4G will come to where I live. In the meantime, the 3G coverage for the new card works just as well (in one case better) as the old one did. Like I said earlier, this is an expensive backup broadband solution, but there have been times where I’ve needed to use the MiFi to get connected here locally.
I mentioned that there was one case when I was seeing better coverage. That is in my office and the theatre. The original MiFi wouldn’t really get a decent enough signal in those locations to warrant turning it on. But the new card seems to be connecting quite well. So, that’s an improvement and a welcome one has Comcast tends to get wacky every now and then here. Intriguingly as I write this post, Comcast has just gone flaky here, so I’m actually using the 3G connection at the moment.
As you probably already know this edition of the MiFi card comes with a removable battery which is a positive. Again, as you probably already know 4G connectivity eats battery life, so I imagine if I’m going to be taking a long trip to a 4G covered area I will probably pick up an extra battery to tote along. I’ve noticed in having the card on for about 2 hours that it runs noticeably cooler. Again, that’s using 3G not 4G. I’m also noticing that the battery life seems a little better, but that may be because the first card had been used so much. Although 3G battery life is rated at 5 hours on the newer card.

The e-Ink display that shows signal strength, battery life, and other indications is interesting to say the least. On the one hand it will make my wife happier when she’s trying to sleep because there are less glowing lights than there were on the original card. There is still a light that glows yellow or green to indicate the power is on or that you are connected. On the other hand you do have to really look at the display to determine what’s going on if you need to.  At least for my tired eyes its not that easy to read.

Those are some first impressions that don’t include any 4G thoughts, because, well, I need to take a drive to check that out. Hopefully that will happen in the next few days and I’ll report back in. The original MiFi card was seen by many as a blessing. You could hardly run into a geek who didn’t have one. That’s changed somewhat of late as rate plans have changed and 4G has started to be rolled out. Of course whether or not you need a MiFi card of any persuasion depends on your situation. It works well for me because of the multiple devices I and my wife use when we’re on the road. So, you need to assess what your situation calls for, as well as your budget and go from there.

The Sprint MiFi 3G/4G Mobile Hotspot by Novatel will be in stores on April 17 but is available for online ordering now. $79.99 gets you the card with a new contract or if you’re eligible for an upgrade. 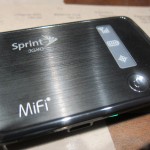 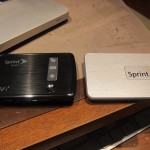 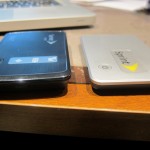 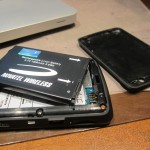