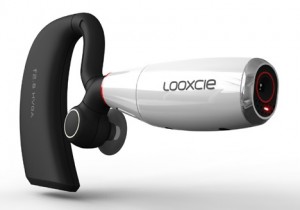 Previously released with full support for only Android, a new version of the Looxcie wearable camcorder headset has launched for iPhones running iOS 4.2. Good news for iPhone users who want a little spycam to record the events of their daily life, but it could be bigger news for iPad owners who want camera support.

Spec-wise, the Made for iPhone Looxcie (as in “look-see”) is identical to the Android version with the ability to record 480×320 video at 15fps. Runtime per charge is four hours, but record time is up to five hours on 4GB of onboard storage, which loops automatically if video is not offloaded. A button on the headset saves clips of the previous 30 seconds, allowing for an “instant replay” for your life. Nice to see an iPhone version of the device, but wouldn’t this be cooler as an iPad accessory?

The device is officially marketed as “Made for iPhone” and makes no mention of iPad or iPod touch online, but the app description does state it is compatible with all three iOS devices. Thus, if you’re using an iPad or previous generation iPod touch running iOS 4.2, the Looxcie could upgrade you with a video camera and BT headset for VoIP calls. Whether that’s worth the retail price of $199 is up to you and the number of interesting things you expect to see during your day.