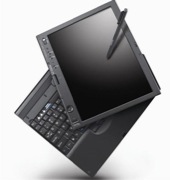 What was I saying about Loren Heiny being on a tear and blogging up a storm about Tablet PCs, MIDs, and other mobile devices? He’s not just on a tear, he’s on a roll. Check out his latest, The Tablet PC HAS Been a Thought Leader and see what you think.

Loren takes a look at some of the knocks that have rained down on Tablet PCs over the years and correctly points out that many of them also apply notebooks in general. He even exposes a few interesting myths. Well, maybe they aren’t myths, but just shifting preferences (small screens, lack of optical drives).

Well worth a read.