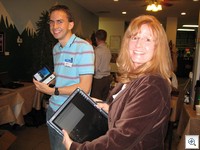 Wow. We had quite a time last night at the GBM Meetup at Pikes Perk in Colorado Springs. I think we had over 20 attendees from as far away Philadelphia and Nebraska, as well as some Coloradoians in the mix. We laid out a ton of Tablet PCs and UMPCs for folks to go hands on with. And the UStream feed was a lot of fun with some interesting commentary from James Kendrick, Lora Heiny, jkkmobile, Thoughtfix, Skip Coghill, Kupe, and some guy who thought he was tuning into a football game, among others.

Of course we had some technical difficulties with the UStream feed as the free wireless at the coffee shop couldn’t hold up to the traffic. But we tethered up my HTC (Sprint) Mogul and used EVDO to get back on again, with still a few bumps in the road. Technology is great when it works, don’t cha think?

There are a ton more pictures on this Flickr Feed of the meetup and several different UStream video clips of the evening. We’ll be writing more up about the event as we get into the week including recaps of some of the fascinating conversations we shared. Today is a travel day for Matt and I as we say farewell, for the moment, to Colorado.