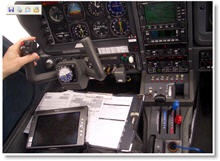 One of the most interesting vertical applications of Tablet PC’s that I have observed is the use of them in aircraft.  Because of the general nature of the device, it just seems to fit well into the cockpit!  I came across this extremely comprehensive piece by a pilot named “Peter” (could not find his whole name anywhere) about using a Motion Computing LS800 as a cockpit assistant, and covers a it of the use of Jeppesen Jeppview/Flitedeck software.

“Over the past couple of years I have spent rather too much time exploring different solutions for automating the common IFR tasks. I have concluded that the whole aviation flight planning and navigation task is best split into two very separate functions: things to do on the ground, and things to do in the air, and that these two functions require different equipment. While it is certainly possible to address both with one product (most likely, a top-end tablet computer with a range of variously unwieldy accessories and loaded up with too much software for reliability) the lack of an integral keyboard, mouse etc will compromise ground usage and the size, weight and software issues will compromise airborne usage…..

…..With an 8″ screen, this (LS800) promised to be the ideal format. I purchased the version with the View Anywhere polarised screen which is necessary for any degree of sunlight readability, 512MB RAM and a 60GB hard drive. The standard product includes built-in bluetooth and wireless (wifi) networking. Microsoft have laid down a specification for tablet computers which, in short, requires an inductive digitiser screen (not a touch screen like PDAs have) which uses a special pen. This is crucial for cockpit use because operation cannot be accidentally interfered with by touching the screen with a finger or a conventional pen/pencil; in fact one can use a tablet computer as a writing surface if necessary.. Like all tablet computers, the ls800 runs the “tablet edition” of Windows XP which apart from a few features to support the digitiser screen and some other tablet-specific hardware is just like normal Windows XP and runs all the normal Windows applications such as MS Office.”

If you’re a pilot, this is worth reading.  If you are not  pilot, this will make you wish you were, just to make such a cool application of a tablet PC!