Ahead of its rumored release in late September, Nokia’s much anticipated Lumia 1520 phablet has made an appearance showing off its new 6-inch full HD 1080p resolution display along with a flip cover accessory that’s designed to protect the screen. The device was spotted in a leaked photo obtained by WP Central showing the Lumia 1520 next to the Lumia 1020.

Some notable changes off the bat on the new Lumia 1520 is that it can now accommodate an extra column of tiles. Currently, on all Windows Phone 8 models today, the widest Live Tile would take up the width of the display in portrait orientation, but on the Lumia 1520, the widest Live Tile and a medium sized square Live Tile can now sit next to each other on the same row.

The 6-inch Lumia phablet has been leaked before and is also referred to by its internal code name of Bandit. 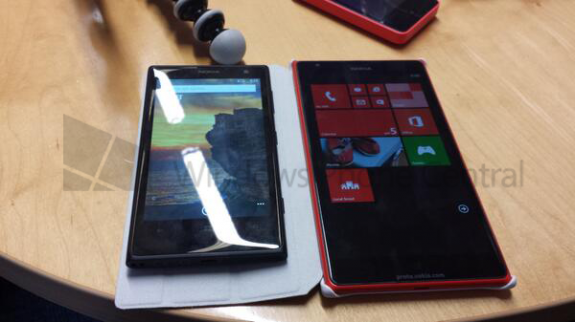 At this point, it’s unclear if the accessory flip cover will be just for protecting the rear and front glass of the large tablet, similar to an iPad smart cover, or if the flip cover will add extra functionality, like support for Qi wireless charging. On recent Lumia models, Nokia had opted to move wireless charging to optional accessory covers rather than building the functionality inside the smartphone in an effort to reduce the phone’s thickness and heft. A similar situation could happen with the Lumia 1520.

The Lumia 1520 is expected to arrive on AT&T’s 4G LTE network in the U.S. and the phone would compete against larger device’s like Samsung’s upcoming Galaxy Note 3 and the Galaxy Mega phablets. This would be AT&T Mobility’s seventh Lumia smartphone that’s currently being offered, including the Lumia 620 model that’s offered through AT&T-owned AIO Wireless.

Inscribed on the bottom of the phone is the proto.nokia.com mark, which had appeared on prior prototype phones from Nokia prior to release.

The phone may support a quad-core processor along with a Lytro-like 20-megapixel camera in addition to the 1080p display. It will likely arrive with Windows Phone 8.1 pre-installed.