The Lumia 2520, Nokia’s first tablet ever Windows-based, is now available on Verizon for $399, $50 less than Microsoft’s own Surface 2.

Announced at Nokia World earlier this year, the Lumia 2520 delivers all the things users might expect from a Nokia-branded tablet. That includes the same polycarbonate plastic shell that Nokia users already know, complete with the option to buy the device in bright red or black.

The Lumia 2520 features the same Snapdragon 800 processor as Nokia’s new Lumia 1520 phablet, however it ups the stakes with an even bigger 10.1-inch high-definition clear black display.

Even though it’s a tablet and not as portable as a smartphone, Nokia didn’t skimp on the cameras inside the Lumia 2520. While the front of the device sports a 2 megapixel camera for video conferencing and taking self-portraits, the Lumia 2520 also includes a 6.7 megapixel rear-facing camera. Because of this, users stand a pretty good chance of getting some decent pictures with it. Nokia has also thrown in a micro-SD card slot so that users can expand the Lumia 2520 beyond its 32GB of on-board storage. 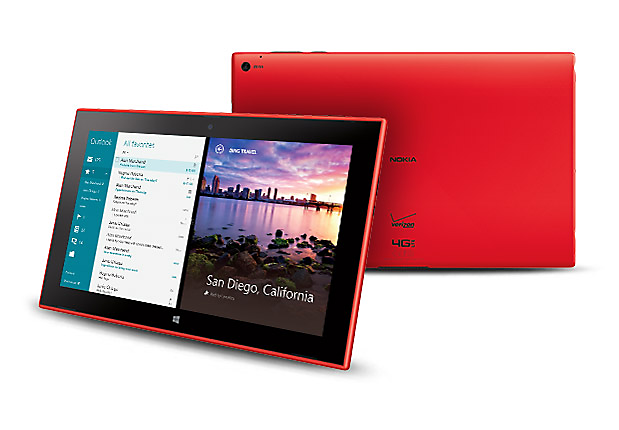 The Lumia 2520 is one of the few Windows RT tablets to feature built-in LTE connectivity. This means users can take the tablet anywhere and avoid the productivity issues that a spotty public Wi-Fi connection cause. User should be aware of their buying options before ordering the Lumia 2520.

While that $399 price might seem attractive, it comes with a two-year service agreement to Verizon. As the off-contract price is only $499, it’s probably a better idea to buy the tablet without a contract and keep the freedom to purchase LTE connectivity if they need it.

Unfortunately, Nokia isn’t throwing in the all-in-one keyboard and case with the Lumia 2520. Users who would like to get a bit of work done with the tablet will need to purchase that separately. Neither Nokia nor Verizon have the accessory listed on their site for sale. However, users do get a free copy of Microsoft Office.

AT&T users will get their opportunity to pick up the Lumia 2520 when it launches tomorrow along the Lumia 1520. While AT&T will  require users to sign a two-year contract to get the tablet at it’s ultra-low $199 price, it’ll also give users a free Nokia Lumia Windows Phone.