The Lumia 530, Microsoft’s newest foray into the ultra-cheap smartphone space is coming to T-Mobile and Cricket Wireless as an iPhone 6 alternative in just a few weeks.

Cricket Wireless and T-Mobile announced their versions of the Lumia 530 along with pricing and availability information early this morning. 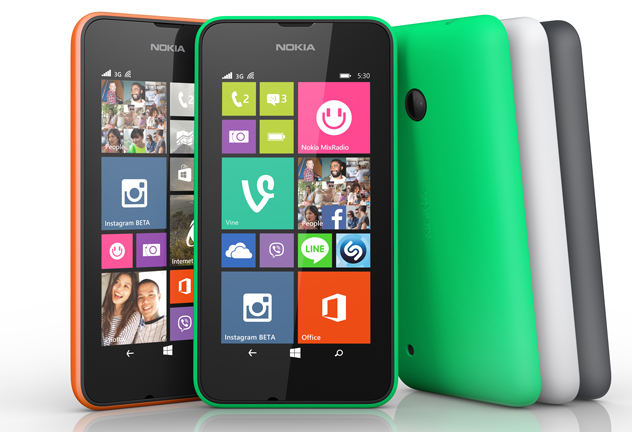 The T-Mobile Lumia 530 will arrive at T-Mobile stores and T-Mobile’s website on October 15th. That’s roughly two weeks from now. The T-Mobile 530 will come in basic white and cost users $79.20 or roughly $30 more than it does for Cricket Wireless users. For those looking for a place in the middle pricing wise, there’s Microsoft’s own retail locations. There it’ll sell for $69.99 beginning October 5th.

Make absolutely no mistake – the Lumia 530 is a barebones smartphones in every sense. There’s only a single camera on the device and it’s only capable of shooting at 5 megapixels. There’s no camera button and no flash. Inside is a quad-core processor that won’t embarrass any high-end smartphone, but does at least deliver decent performance. Only a few things make it a legitimate iPhone 6 alternative for users on a budget.

Pricing is the final area that the Lumia 530 scores big as an iPhone 6 alternative. The Lumia 530 prices announced today don’t include a two-year service contract or any monthly payments. Users can purchase the Lumia 530 at store cost and not have to worry about two years’ worth of commitments. When they’re ready to move to a new carrier they can. When they’re ready to switch to a new phone they can. It’s definitely a smartphone worth considering for children and teens who aren’t old enough to need all the bells and whistles of the iPhone 6 or even the iPhone 5c.

About the only thing users should be weary of is storage. Microsoft hands out free cloud storage with every Lumia 530 but that doesn’t completely make up for the device only coming with 4GB of built-in storage. What does make up for that is the MicroSD slot that’s hidden behind the Lumia 530’s interchangeable shells. Microsoft says users can add up to 128GB of storage to the Lumia 530 with a MicroSD card slot. That’s something users can’t do with the 16GB iPhone 6 or iPhone 5C.

Presumably, users will be able to purchase different wireless shells from Microsoft’s own stores and the other retail locations that’ll sell the Lumia 530. Today, Microsoft also revealed that Best Buy will carry the Lumia 530 too. Sales at those stores will also kick off on October 5th or $69.99.