With Microsoft’s Mango release for Windows Phone, a second crop of new hardware was released. And of those devices running Mango, otherwise known as Windows Phone 7.5, Nokia may be leading the pack with its debut Windows Phone devices marketed under the Lumia brand. Nokia, which bested out its closest rival HTC, now has garnered the most market share for Windows Phone releases with Mango.

The company’s Lumia 800 and Lumia 710 smartphones now account for 45 percent of the Mango market, while HTC rakes in 40 percent. Samsung comes in third with 12 percent of the market. Nokia’s Lumia 800 phone has garnered positive reviews from users and media.

Despite a respectable margin on the Mango release, Windows Phone itself still accounts for a small market share when compared with the total shipments of iPhone and Android smartphones.

The stats provide for an impressive showing for Nokia, which had only debuted its phones in October 2011 at Nokia World as the company’s first phones to run Windows Phone after changing its MeeGo and Symbian strategy and hedging its future on Microsoft’s mobile OS. 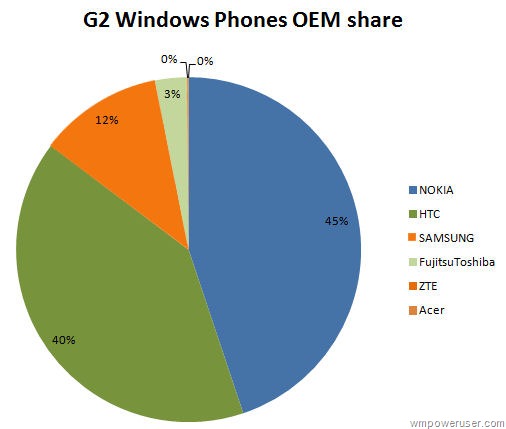 The Lumia 800 has also been performing strongly in various markets. In Denmark, demand for the Lumia 800 is at levels that are seen with the iPhone 4S.

“We have since Friday experienced the same demand, as shown by the introduction of the iPhone 4S. Lumia 800 has sold more than three times as much as number two on our sales charts, “Morten Steen Jensen, purchasing manager at TDC, Denmark’s largest telecom company, told Mobilsiden.dk. The TDC chief says that one third of customers have chosen a Lumia in either pink or blue, rather than the black variety.

Via: WMPU and My Nokia Blog