July 14 will be a big launch day for U.S. carrier T-Mobile as there will be two high-end devices that will become available to customers on that date. According to leaked internal documents obtained by TmoNews, it appears that the flagship Nokia Lumia 925 with Windows Phone 8 will launch on July 14 alongside the waterproof Sony Xperia Z flagship running Android.

At this time, pricing isn’t known and T-Mobile US still has not announced an official release date for either devices, but given that July is quickly approaching, this will be good news for customers who have been waiting for either device to hit the U.S. 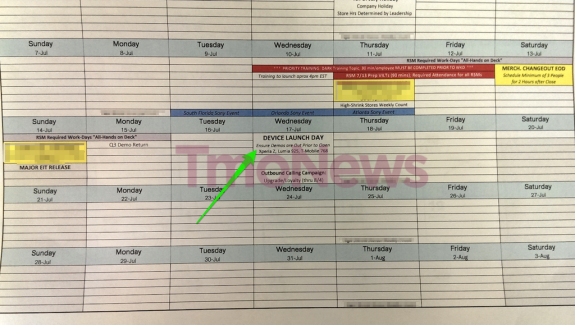 The Xperia Z was announced by Sony earlier this year at the Consumer Electronics Show. The elegantly crafted water-resistant and dustproof smartphone won a number of design accolades, including a Best of CES from GottaBeMobile. Given that half a year had gone by since the device’s introduction, the Xperia Z may not feel like the high-end phone that it once was when it was released, though the device still has a very detailed 13-megapixel Exmor RS camera sensor from Sony.

It features quad-core Snapdragon S4 Pro processing power, rather than the newer Snapdragon 600 on the competing Galaxy S4 Active on AT&T or the Snapdragon 800 CPU. The device has a 5-inch 1080p full HD display.

Still, with summer upon us, having a waterproof and dustproof phone could come in handy when lounging by the pool or spending time by the lake or beach.

As far as the Nokia option, the Lumia 925 could be seen as an updated model of the AT&T Lumia 920. Both devices feature an 8-megapixel PureView camera that features optical image stabilization, low light photography capabilities without the need for artificial flash lighting, and stabilized video shooting. The Lumia 925 boasts a slimmer design than the Lumia 920, but to achieve thinness, Nokia moved the wireless charging capabilities of the 920 to an external accessory on the 925.

Nokia will also be hosting an event on July 11, a few days prior to the rumored launch of the Lumia 925, to debut a new phone that’s been rumored as the Nokia EOS and has taken on identities as the Lumia 1020 and the Nokia Zoom.