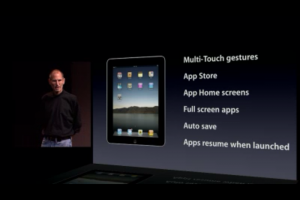 At today’s “Back to the Mac” event, Steve Jobs and company showed off Mac OS X 7 a.k.a. Lion. Unlike the Snow Leopard release, which was primarily under the hood improvements, Lion is mostly UI improvements, specifically features they’re bringing in from the iPad and iOS. 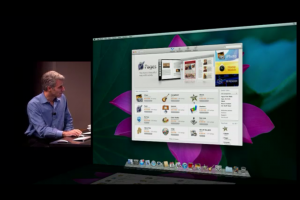 Mac App Store: Like the App Store for iOS, this is a marketplace to get apps for your Mac. Unlike iOS, this is not an exclusive channel, so there’s no lock-in/out. The store interface looks similar to iTunes in the same way that all Mac applications share a look but is pretty distinct. One-click downloading leads to automatic installation. Updates are automatic. License allows one app to be used on all your personal Macs (as if you didn’t already pay them enough money for your multiple Macs). Revenue split is the same as for the non-Mac App Store: 70/30. Mac users can look forward to it opening within the next 90 days.

Full-screen view: Exactly what it says. View apps in fullscreen mode. Gesture to get back to dashboard or desktop. All that gets integrated with the standard Mac interfaces of Dashboard and Spaces via a new Exposé-like screen called Mission Control that shows you everything running on your Mac. An app running fullscreen shows up as one tile, a Space running multiple windows shows as another, etc.

Overall, this makes Mac OS X Lion look like it will be the most touch-friendly desktop OS around. Seriously, if my video of touch-optimized Firefox had been released tomorrow instead of this morning, you’d be accusing me of ripping off Lion. Gesture control did look clumsy on the Magic Mouse, but it’s probably better on the trackpad. Still not designed for a touchscreen, but it’s getting there. Lion pounces Summer 2011.