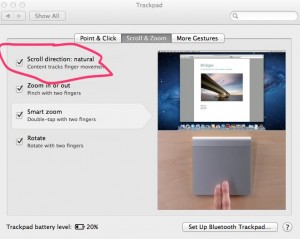 I bit the bullet and installed OS X 10.7 (Lion) on my iMac. The install went pretty well and I’m just now getting a chance to explore a bit under the hood. One of the big changes that will require a bit of muscle memory retraining is what Apple now calls “Natural Scrolling.”

By default how we used to scroll with a mouse or a Magic Trackpad (I use the latter) has been reversed. To scroll down a page you scroll up with your input device. To scroll up, you do the opposite. I’m sure this will eventually even it’s way out, but it does take some getting used to. At least in my case. I use a Magic Trackapd for the iMac and like it quite a bit. When I am ready to scroll I’m used to my two fingers hitting it and already beginning to move down the surface. Well, with the change, that just leaves whatever is on the screen sitting still. So, I’m got to some retraining to do.

Never fear though, there is a switch to turn “Natural Scrolling” off and take things back the way they were.

I’ll stick with re-training myself for the time being. But I have to say, it has been interesting to feel my brain and my fingers short circuiting here after doing the Lion install.