The new Mac Pro from Apple has received an official teardown from the folks at iFixit, and the new machine received a glowing score of 8/10, making it one of the highest-scoring teardowns of an Apple product that we’ve seen in a while.

One thing that has been great about the Mac Pro is that it’s easily upgradable, unlike Apple’s MacBook lineup. The tower computers can easily be opened up and more RAM can be slotted in if need be.

However, many folks were afraid that the new design of the Mac Pro would severely limit the upgradability, but iFixit doesn’t think so. The new computer, which forgoes the traditional tower setup in favor of a revolutionary cylindrical shape, uses no proprietary screws and RAM is accessible without needing any tools. 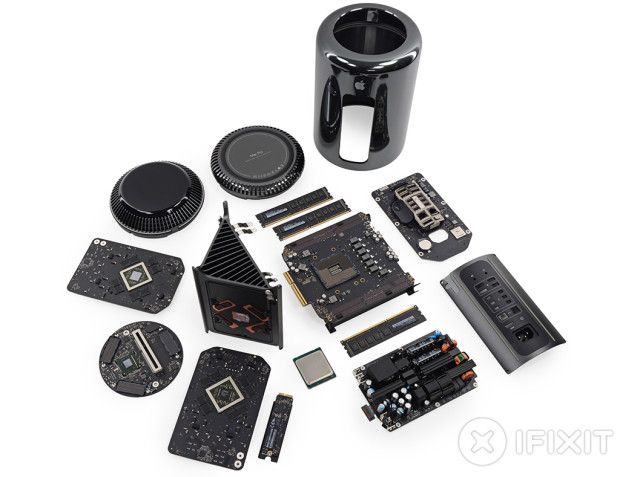 Furthermore, the CPU, GPU and SSD storage are all replaceable as well. Interestingly enough, one of the GPU cards hosts the slot for the SSD, meaning that users could potentially double up on SSD storage, but that’s something that’s a bit of a mystery still.

In any case, everything is fairly easy to get to. Only one screw needs to be removed to get to the SSD, while only four screws get in the way of the dual GPU cards.

Read: Mac Pro in High Demand, Will “Take Time” to Catch Up

Overall, the new Mac Pro sports a very unique design, and the iFixit teardown shows how Apple can fit a desktop computer inside a cylinder that’s only about a foot tall and maybe just 5-6 inches in diameter. We’ve never seen anything like it, and while there are a handful of proprietary components, all of the main hardware is user-replaceable and non-proprietary, making it easy to upgrade if need be.

Then again, iFixit notes that there are plenty of proprietary connectors and the wiring is a plenty tight inside the cylinder, making it a bit difficult to work on in the first place, compared to a traditional tower desktop computer.

However, if you’re looking to save money by upgrading components yourself, you’ll still have to shell out at least $3,000 for the base model, which comes with a