Despite recent predictions and projections stating that sales of netbooks and notebooks are being cannibalized by the emerging consumer consumption tablet category that is being led by the popular iPad, the tablet category may be cannibalized by the ultra-portable computer segment that’s being led by the newly unveiled MacBook Air. According to analysts at Rodman & Renshaw’s Ashok Kumar, “A fully functional notebook in a very attractive form factor may be resonating more with consumers than a content consumption only device.” 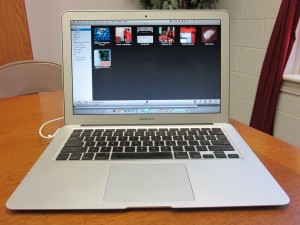 The MacBook Air–the smallest version is comparable in dimensions to the iPad–costs just about the same as the high-end iPad with WiFi, 3G and GPS capabilities, and 64 GB of internal storage, but can deliver a lot more power than the consumption-centric iPad; the Air runs the full Mac OS X operating system giving it the power of a full laptop where users can not only watch Internet viewers and surf the web, but manage files and documents, create and edit spreadsheets and presentations, edit and compile videos, handle databases, and more. Because of the value proposition of the MacBook Air, its portability, and its power, the new MacBook Air could potentially take sales away from Apple’s iPad at the $1000 entry point.

The device was recently awarded a best-in-class title by Consumer Reports and delivers more performance than a netbook but with the same portability. While netbooks have underpowered graphics coupled with an Intel Atom processor, the MacBook Air has a higher end Intel Core 2 Duo processor that’s found on the base 13-inch MacBook Pro along with an NVIDIA discrete graphics processor. Long battery life and a sub-3-pound form factor, strong build quality, and a chic design all help the MacBook Air stand out.