I ordered a new custom MacBook Pro with Retina Display, but it won’t ship for another two to three weeks. In the meantime, I visited the San Francisco Apple Store where I’m hoping to purchase a retail configuration for review purposes. Apple is selling two models at retail for $2,199 and $2,799.  The cheaper model comes with a 2.3GHz processor and a 256GB SSD. The pricier model comes with a 2.6GHz processor and 512GB SSD. Both ship with with 8GB of memory. The optional 16GB of memory, 768GB SSD and 2.7GHz processor are only available online and can push the cost up to almost $4,000. 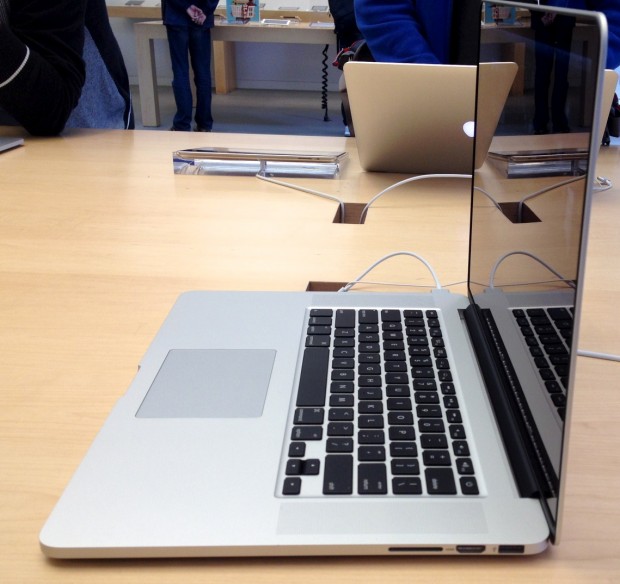 Apple’s MacBook Pro with Retina Display price points are huge deterrents for many potential buyers. Previous generation MacBook Pros debuted in similar price ranges, but that was long before the advent of the $999 MacBook Air and $1,199 13″ MacBook Pro. While some people will certainly be able to justify the $400 or so price premium over the thicker 15″ MacBook Pro, others won’t find enough reason to spend this kind of money on a laptop. Some people, such as those that need more than 256GB of storage in their primary machine,  will be better off buying a standard 15″ MacBook Pro as a desktop replacement and a MacBook Air as their portable machine for about the same cost as a MacBook Pro with Retina Display. 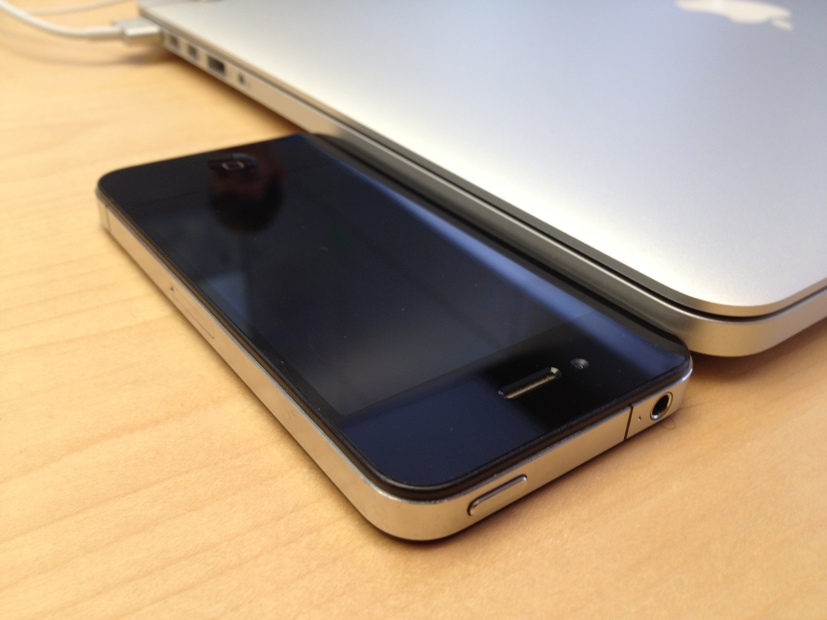 Here you can see how thick the new MacBook Pro is compared to the iPhone 4S. It clearly isn’t in the same neighborhood as the MacBook Air, but it is certainly thin enough to make this Apple’s first truly portable 15″ notebook . 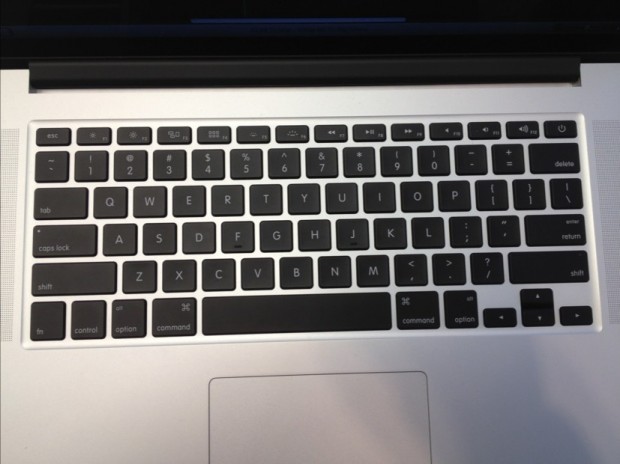 The thinness does come at a cost however. The keys don’t have as much stroke, which means the typing experience isn’t as comfortable as with the old MacBook Pro. Typing on this keyboard feels just like typing on the 13″ MacBook Air. This won’t be a problem for some people, but it will be a serious problem for those accustomed to keyboards with more spring in them. 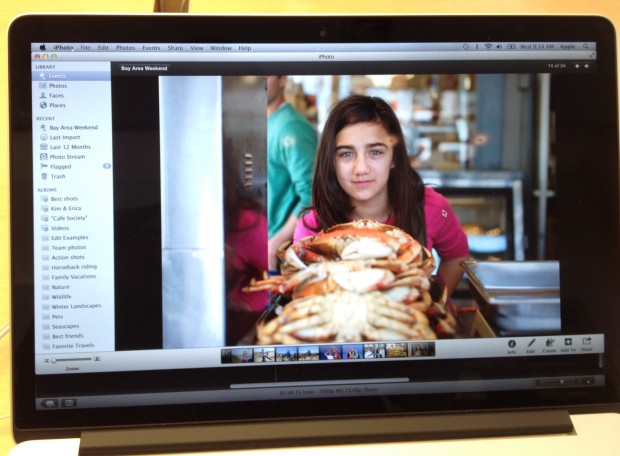 Apple states that the MacBook Pro Retina Display has less glare than the older MacBook Pro displays. That statement may be true, but the new display is more reflective than the MacBook Air’s display. You can see your reflection in the Retina Display, which is not desirable, especially for graphics professionals. Unfortunately, Apple isn’t offering a a Retina version of the optional matte/anti-glare display  offereed on the standard MacBook Pro. Note the white circles in the above, including the one by the model’s left eye. Those are ceiling lights and are just the sort of thing that make it difficult to edit photos and video.

The Retina Display is very nice and crisp thanks to its 2880 x 1800 resolution, but users will have to wait until the next version of OS X is released and applications are updated to accommodate the high pixel density. Some application icons and text are jagged, which can be distracting. It’s not the end of the world, but it isn’t something you wan to see on a $2,199 to $3,900 laptop. 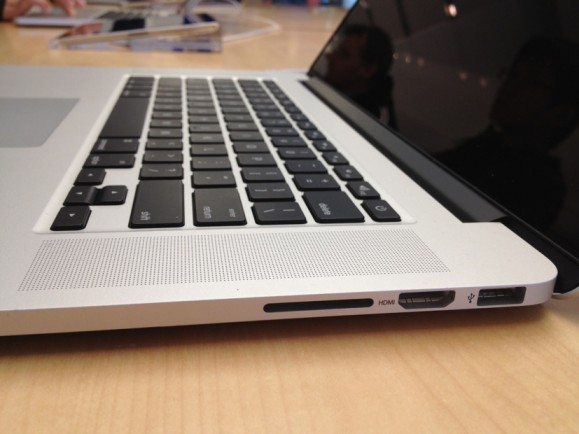 The MacBook Pro with Retina Display is the first MacBook to come with an HDMI port. That’s a feature that’s been available on Windows notebooks for ages. Professionals will continue to connect to Apple Cinema Displays and ThunderBolt Displays with the Thunderbolt port, but the HDMI port will be very useful in a number of settings. More and more hotel rooms have HDTVs that can be used as external displays, but MacBook users are generally out of luck unless they happen to have a Mini Display Port to HDMI adapter.

Another  nice improvement is that the SD card slot is now on the right side of the MacBook Pro and away from the USB port. This means there’s less chance of USB peripherals getting in the way as is sometimes the case with the old MacBook Pro design.

The new MagSafe 2 adapter plugs into the left side of the MacBook Pro. This adapter is shorter and wider than its predecessor to accomodate the thinner MacBook design. There are now two Thunderbolt ports instead of just one, which will be of more benefit once Thunderbolt peripherals become more popular. For the first time, Apple’s removed the Kensington lock slot from the MacBook Pro, which means it cannot be secured with a security cable. That’s a big negative for some organizations. 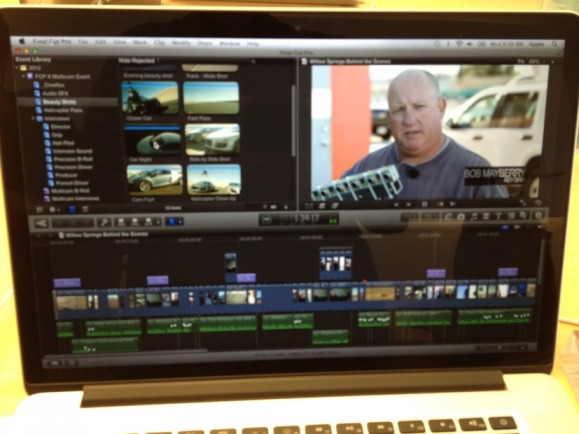 The MacBook Air is still the king of thin and light, but it’s not powerful enough to edit video. Unlike the energy efficient MacBook Air components, the MacBook Pro with Retina Display uses the same components found in the thicker MacBook Pro. That means it’s speedy enough for creative video editing. Apple was displaying a sample Final Cut project that runs just shy of four minutes. I exported the project and it took a little over three minutes to complete the task. Your video editing mileage will vary depending on source content and how many effects are applied, but it blows away the MacBook Air.

One thing I really like about the new MacBook Pro with Retina Display seems to run cooler than previous models.  The old MacBook Pro gets hot enough to make it uncomfortable to use on your lap. The new MacBook Pro was warm to the touch after exporting the Final Cut project, but it was much cooler than I expected. It isn’t as cool as the MacBook Air 11″ or 13″, but that’s expected considering it has a full-speed processor and dedicated GPU.

The new MacBook Pro with Retina Display doesn’t have an optical drive, which shouldn’t be a problem most of the time. However, there are times where an optical drive is necessary and I recommend keeping an external optical drive handy just in case.  The trade-off of thinness and portability is worth this relatively minor inconvenience.

Here is Apple’s MacBook Pro with Retina Display video overview. Yes, it’s pretty much an extended commercial, but it is worth watching.