Apple has released a new ad that shows off the different ways that MacBook users customize their machines, with Apple logo stickers being the focal point of the commercial.

In the ad, Apple calls the MacBook Air “the notebook people love,” presumably because they can slap stickers all over it and use the glowing Apple logo has a centerpiece for any kind of sticker art.

The 30 second spot goes through numerous sticker designs that you can buy at a number of online stores, with Etsy being a popular place for such products. Apple doesn’t often promote third-party Apple accessories, so you know it’s something special when the company creates an entire ad focused just on MacBook stickers.

This isn’t too surprising, though, as these stickers are arguably the most popular MacBook accessories on the market, and users love them so much because they can add a bit of their own personality to their laptop that anyone can see.

Furthermore, this ad definitely adds a personal touch that we don’t often see in Apple commercials. Of course, most of the recent ads have shown off ways that people use their Apple products, but this MacBook ad shows that in a completely different way.

Plus, as Apple quickly skims through all sorts of different sticker designs on different MacBooks, you can clearly see that some of the MacBooks are scuffed up and well used, proving another point by Apple that its machines get a lot of use out of them.

And out of the MacBook lineup, the MacBook Air is the most popular laptop that Apple sells, mostly thanks to the machine’s lightweight design and small form factor, as well as the enticing $899 starting price tag, which Apple began doing back in April when the company unveiled an updated MacBook Air with slightly quicker internals. 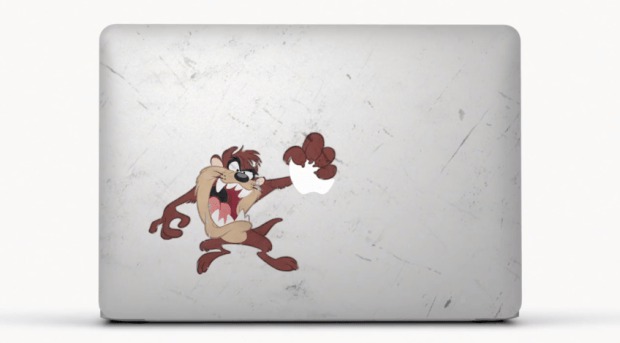 Plus, a newer MacBook Air is rumored to still come later this year, with a 12-inch model expected to arrive with a Retina display, as well as new processors that will make the MacBook Air even faster, but don’t expect the 12-incher to start at $899. It’ll most likely be set in the $999 range easily. Although, we wouldn’t be surprised to see the 11-inch and 13-inch MacBook Air models get Retina displays as well.

Other than that, we haven’t heard a lot of rumors about new MacBooks. The focus has been mostly set on the iPhone and iPad, where it’s expected that the iPhone 6 will get a fall release with a larger screen, and the iPad Air will get a subtle update that could bring a slightly-improved design, as well as Apple’s Touch ID fingerprint sensor.