The Madden 15 reviews are in, with deep looks at the new Madden 15 features like enhances Ultimate Team, Connected Franchise and The Gauntlet.

This early Madden 15 review seeks to answer the most important question yet, ” Is Madden 15 worth buying?”

One common knock against Madden is that each new version is just a roster update and if you are lucky a few graphics upgrades, which leaves many gamers wondering if it is worth buying Madden 15 or if they should just buy a cheap used Madden 25 copy or join EA Access instead.

After spending five hours playing Madden 15 I’m ready to help you decide if Madden 15 is worth buying this year. Although five hours is a very small amount of time to play a game before passing judgement it is more than enough to figure out if the new Madden release is worth buying. 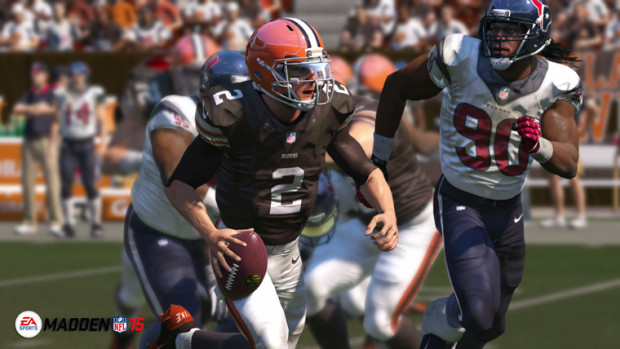 Read on to find out if Madden 15 is worth buying.

After playing years, possibly decades of Madden, there are some new versions that clearly aren’t worth the money I paid, but this year is different — especially on Xbox One and PS4.

Read on to learn why Madden 15 is worth buying this year. This is based on the Madden 15 Xbox One release which shares features with the PS4 Madden 15 release. Not all the new Madden 15 upgrades are available on PS3 and Xbox 360. For more on those differences read five reasons to buy Madden 15 on Xbox One or PS4.

I’ll be back with a more in-depth review of Madden 15 after completing more of the new Ultimate Team Mode and getting more experience in the online gaming area.

Is Madden 15 Worth Buying?

After spending five hours playing Madden 15, and with many more hours in front of me it’s clear that Madden 15 is worth buying if you own a PS4 or Xbox One. Some of the new Madden 15 features that really make the game are not available on older consoles.

The new Madden 15 gameplay is much more balanced. Although interceptions happen and the new QB inaccuracy rating leads to some errant throws the overall mix of offense and defense is just right. You can still screw up and lose the game, but it feels more like your error than a glitch in Madden.

I love to play defense and the new Madden 15 defensive features are one of the biggest reasons Madden 15 is worth buying. Starting at the line you can now look at match-ups to see where your team is weak. While on playing Defense you can now lock on to a single player and use the right trigger to jump off the line for a fast attack. Combine this with power or finesse moves to get to the QB or running back fast. I don’t use the defense lock camera all the time, but it is a very fun way to play defense that you won’t get on older versions of Madden. 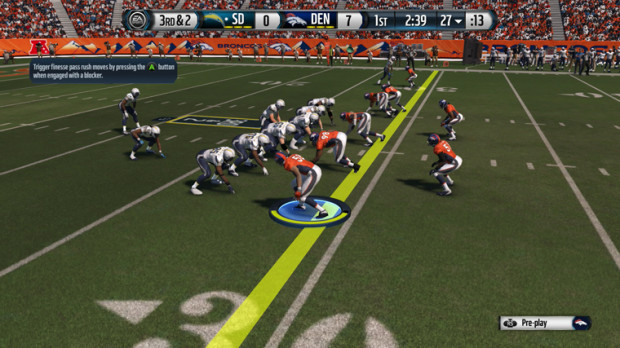 Lock on to a defensive player and pop off the line to make a big play.

Players are now smarter, knowing where they need to be for good coverage and reacting better to routes and the evolution of the play. You’ll still get beat from time to time, but Madden 15 Defense AI is way better than in Madden 25.

When it comes time to tackle the two tackling modes are easier to use than in previous games. On Xbox One A performs a more conservative tackle while X or the right stick delivers a powerful hit that can cause a fumble or stop a player dead in their tracks before the first down marker. The tackling animations are also more realistic and varied. I still occasionally end up tackling air, but it does not happen as much as in earlier games. 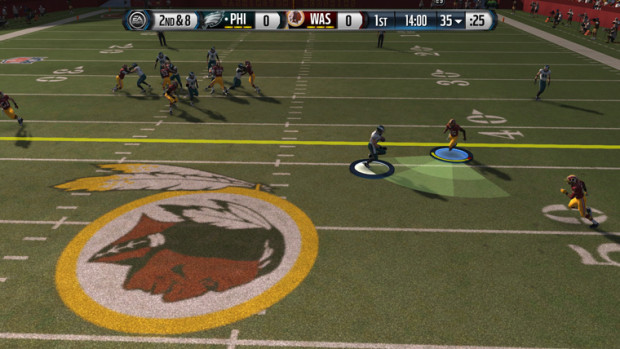 The Tackling Cone and improved hit stick are key improvements.

When it comes time to lead your team down the field there is a new playcalling menu that offers new statistics and fast access to plays as well as new playbooks with formations and concepts that really open up your options.

Playcalling is new on Offense and Defense with suggestions for specific plays to beat the team’s chosen formation and the current downs. You also get community suggestions that include states like how effective it is and how many yards a play may give up.

One of my favorite parts of the new playcalling is the ability to see where I have an advantage on offense. This helps me look for key matchups where I have a better chance of a completion and more important for my style of play – less chance of an interception. 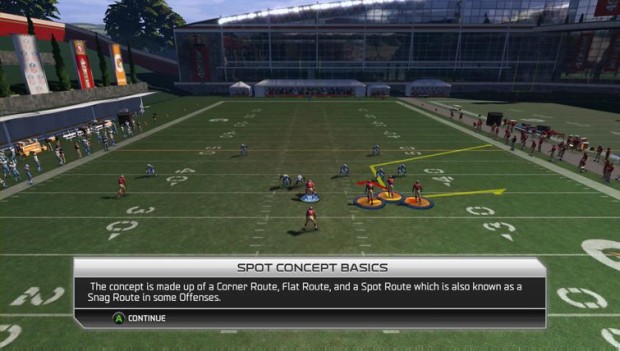 Learn how to play better offense in Madden 15.

While playing Offense the player confidence and QB Inaccuracies will factor into the game. QBs from Colin Kaepernick  to Ryan Tannehill will occasionally throw an inaccurate pass, just like in real life. This already resulted in an interception against me at a pivotal point in the game, which is frustrating but accurate for a Miami Dolphins drive.

Madden 15 offense options also include no huddle and clock chewing options to deliver faster access to plays and keep the defense on their toes or to slow it down and kill the clock to end the game ahead. 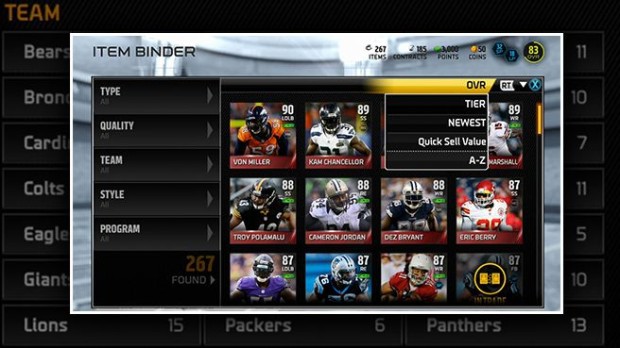 Madden Ultimate Team in Madden 15 fixes the major problems I had with it on Madden 25. It is now much easier to handle contracts and manage your team. In Madden 25 extending a contract took forever and was a horrible experience. It’s much easier in Madden 15.

The Gauntlet is a fun new way to test the skills you learn in Skills Trainer. Although I am still trying to get very far in the Gauntlet it is very fun. The video below shows some of the gameplay. In addition to this new mode there are new skills that help you learn more about the game of football to make better decisions.

Madden 15 isn’t a perfect football game and I wish a NFL 2K15 release was days away to deliver competition to the football video game arena, but there are still easily enough improvements to say that Madden 15 is worth buying on Xbox One or PS4.