As part of the process a team at EA Sports analyzes the player’s performance and skill to come up with a combination of ratings that lead to an overall player rating. This is the last year that the Madden Ratings Czar is a part of this complicated process that the players don’t always agree with.

This is the second set of Madden 16 ratings from EA with room for 20 more positions and teams to come as we lead up to the Madden 16 release date in late August. 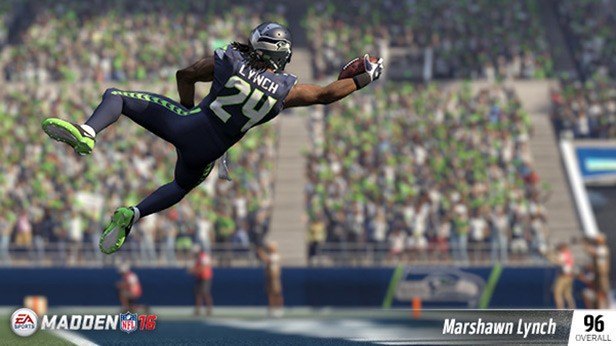 The best running backs according to Madden 16 ratings might surprise you.

[contextly_sidebar id=”S5xkZBZ0TZ54rQhiclz47vZyvT47nW1t”]EA Sports will eventually get to the Madden 16 team ratings, but that is normally the last thing that the company reveals in the days before Madden Season starts. If you don’t want to wait to see what EA Sports has to say, Madden School delivers a great breakdown of potential Madden 16 team ratings and the potential top players on each team.

Here is a look at the best running backs in the NFL, according to their Madden 16 ratings.

There is sure to be some debate over the best running backs in Madden 16, as Marshawn Lynch beats out Adrian Peterson by a single point in the overall ratings. This is likely due to Peterson missing most of last season due to a suspension. David Robinson reports on Twitter that Peterson is prepared for a “Bounce Back Season” which could lead to a higher Madden 16 player rating based on performance.

The Madden 16 player ratings change each week with roster updates that come from the team at EA Sports analyzing the footage and performance of each player. This is part of the realism that EA wants to deliver to the game, alongside new Madden 16 features.

To arrive at the overall Madden 16 ratings, there are many factors that play a role in the final number. For running backs we see individual ratings on Strength, Juke, Elusiveness, Acceleration, Speed, Trucking, Stiff Arm, Spin Move, Agility, Catch, Carrying and more. The breakdown of each player helps gamers understand why the overall rating is the way it is. Here are important stats on each player.

Keep an eye out for more Madden 16 ratings in the coming days as EA shares more information about the top players at each position before getting into the team breakdowns in August.