With Madden 15 finally in the hands of some lucky early downloaders, reviews of the world’s premiere American football game are trickling out. Each offers a unique answer for the question millions of Xbox and PlayStation gamers ask themselves every year: “Is Madden 15 worth buying?” Two of those early reviews also perfectly capture the problem with yearly updated sports titles.

Madden 15 reviews first starting appearing yesterday, five days before launch and shortly after developer Electronic Arts began letting subscribers of its EA Access game service download the title for trial periods of six hours. Most of these Madden 15 reviews aren’t drawing a ton of attention, but they do offer a unique take on what the game and franchise mean to so many people. 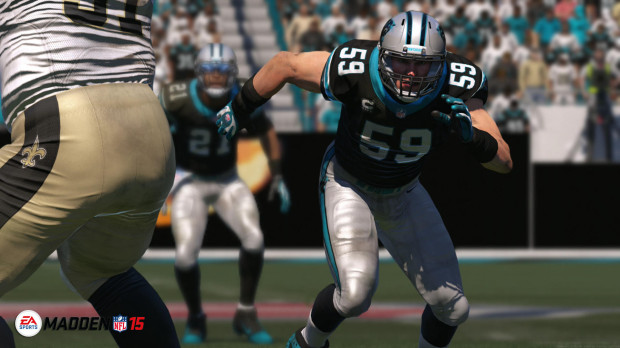 USA Today’s Madden 15 review attempts to ask that value question, but in a way that puts the game’s transition to the Xbox One and PS4 in some context. “Perhaps the biggest knock against Madden 15 is a lack of significant innovation. Then again, just making the jump to new video game consoles with few hiccups should be considered a victory,” reviewer Brett Molina notes. The review goes on to recount many of the small tweaks Electronic Arts has made in every day gameplay. Like trick moves for possibly sacking quarterbacks early and calling audible changes in plays when members of the offensive line have an advantage over defenders. The conclusion seems to be that these are both welcome changes that veterans might not use all that often.

He concludes that Madden 15 has no one feature that will stun users, but that it’s small feature updates and better graphics make it a decent title.

The Madden 15 review from GameInformer follows slightly different lines. Instead of focusing on the changes in the game’s core mechanics, reviewer Matthew Kato focuses on the lack of progress in the game’s high-profile modes, like Connected Franchise. Mainly, he laments the lack of new options for procuring players and managing player free agency. He does praise Connected Franchise mode’s new player confidence options and individual game preparations like drills. He seems to approve of the changes made to offensive and defensive play too, but still feels that when users are running the ball the game is still at its worse.

“Sports games like Madden are often chided for being too iterative, but in this case I hope we’re witness the first steps in a larger progression,” Kato writes.

All told, Madden 15 reviews all seem to come to the same consensus that core upgrades to the franchise have always centered around. By picking up the game users are getting an improved experience that doesn’t kickstart any revolutions in the way people experience football on their gaming console. Users who have last year’s game, Madden 15 are still going to be stuck evaluating each feature and coming to their own conclusions about whether it’s a worthwhile purchase. Meanwhile, users who haven’t purchased a new game in the franchise for a while will find that this is a worthy upgrade – provided that they’re picking up the Xbox One and PS4 versions of the game.

Read: How to Play Madden 15 Trial for More than 6 Hours

Madden 15 will be available on the Xbox 360 and PS3 on August 26th, but as GameInformer notes users can expect a somewhat paired down experience. Everyone expects the game’s graphics to not be as nice as what’s available on the two newer consoles, but there’s more than just that missing in those versions. For starters, players have more paired down AI, making them less formidable or helpful in certain situations. The last-generation versions of the game don’t include some of the new presentation stuff either – for example, a lot of the camera angles remain the same as past editions of Madden.

When Madden 15 launches next week it’ll be available starting at $59.99 at stores like GameStop or through Xbox Live and PlayStation network.