With it’s 9.7-inch multitouch screen, the iPad is the perfect device for video game versions of board and card games, and fortunately, some companies are finally figuring that out. As a result we get games like Magic: The Gathering Duels of the Planeswalkers 2013 on the iPad.

Duels of the Planeswalkers first came to the consoles and PCs a few years ago, and with its third rendition the franchise finally comes to the iPad. In the game, players use pre-selected decks of Magic cards to fight against the Planeswalkers. 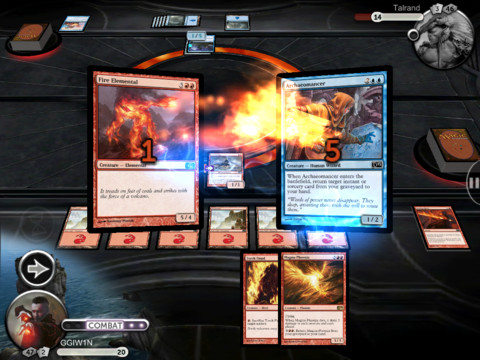 Despite the lack of pure deck building, Duels of the Planeswalkers provides a lot of variety in gameplay types. Each theme deck plays differently, so players have to adapt to each new strategy if they hope to win with or against new decks.

The basic strategy of Magic: The Gathering hasn’t changed much in the past 20 years. Each player starts with 20 Health and a full deck of about 60 cards. Each deck contains monsters and spells along with lands to pay the “cost” of each card. The goal is to use the monsters and spells to bring your opponent(s) down to 0 Health before they do the same to you.

If this basic overview sounds like a bit too much, don’t worry. The game provides a good tutorial to teach new players how to play the game. Players just need to download the free game to play the lowest difficulty level and tutorial, anything more is a $9.99 in-app purchase.

I bought the full game right away because I loved the previous games, but new players have the chance to make sure they love the game first.

Magic: The Gathering Duels of the Planeswalkers 2013 is playable on both the iPad 2 and new iPad, and it really shines on the new iPad. The text on each card is easy to read even when not zoomed in on the Retina Display, and the art on the cards looks amazing.

Players control the game using intuitive gestures like dragging cards onto the playing field to cast them. Some gestures, like dragging attacking creatures to the players they’ll attack, are laborious when repeated many times but they’re by no means deal breakers.

The game does have some online play, which is fun when there are others playing online. Finding games is difficult at times though.

Fortunately, there’s a lot of interesting and fun single-player modes in the game including several types of campaigns and custom matches. It’s well worth the $10 for the full game, or at least the free download.