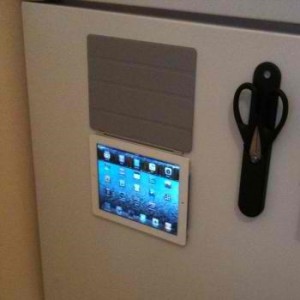 If you’ve got an iPad 2 with a smart cover, a fun trick you might want to try is sticking it to your refrigerator. 9to5 Mac reports it worked well with one of theirs, which was later confirmed by Gizmodo. Our own Josh Smith found it less than secure, however, so maybe try it near the bottom first.

No big trick here. The smart cover uses magnets to attach to the side of the iPad 2, as well as attach to the front panel when closed (which then turns off the screen). The magnets apparently are strong enough to keep the iPad secured to the cover when held up by it. Whether they work with your fridge depends on the magnetic attractiveness of your food cooling equipment. 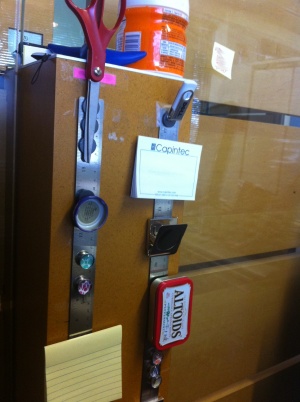 This, coupled with the earlier report of the Magstand2 from Macally, is putting a strain on my iPad 2 resistance. So far, despite overwhelming passive peer pressure, I’ve not succumbed to its lure, but I’ve been really itching to expand my use of magnets for organization. I set up a magnet “board” at work a year and a day ago, and have been pondering ways to make better use of it since. No surprise, one of those ways was to use it as a tablet holder. I chose not to pursue that idea for several restrictions, not the least of which was the inability of my Tablet PCs to be held up by magnets. Gotta say, the magnet-friendly iPad 2 has me actively re-thinking the situation.