The first major Windows 10 update since Microsoft began letting users install the operating system upgrade on their notebooks, desktops and Windows 2-in-1s, is finally available. Microsoft is calling it the Windows 10 November Update and it adds a few new features for smartphone owners.

Microsoft announced that users could download the Windows 10 November Update this morning in a post on its Windows Experience Blog. This is the same update that many have called the Windows 10 Fall Update or Windows 10 Threshold 2. Windows 10 is a free upgrade for notebooks, desktops and 2-in-1s that run Windows 7 or Windows 8. Windows 10 includes a new Start Menu that looks and behaves a lot like the Start Menu from Windows 7 – provided users don’t have Tablet Mode enabled. Windows Store apps run in traditional resizable windows and full-screen depending on which mode is enabled. The update also contains Cortana, Microsoft’s personal digital assistant. 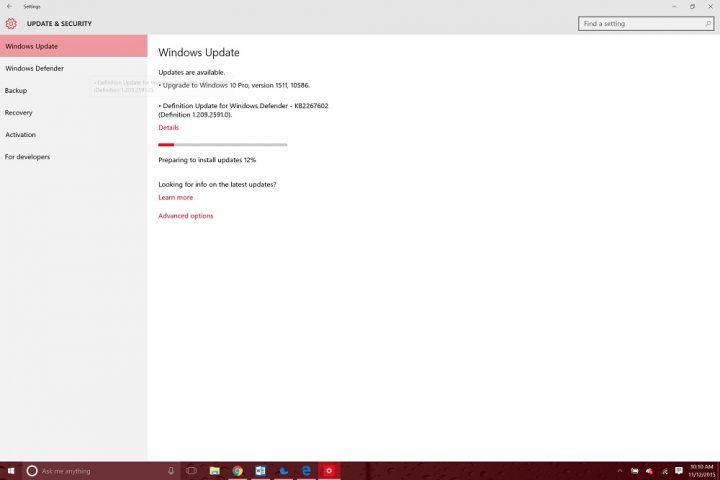 There are no ground breaking features for this new software update. Instead, Microsoft is hedging its bets with small, Nice-to-Have fixes. The Microsoft Edge web browser now lets users stream video directly to a DLNA enabled set-top-box. Favorites and Reading List stories now sync across devices with the same Microsoft Account.

With the Windows 10 November Update, users no longer have to download the dedicated Skype desktop app. Instead of a Get Skype shortcut, Microsoft includes Messaging, Skype Video and Phone apps that allow users to place voice calls, send messages and video chat with friends without a separate download. By default, these apps connect to the user’s Microsoft Account.

Users can now write notes to Cortana instead of using their voice or typing out a message. Cortana monitors movie ticket confirms and other appoints, then dispatches an Uber if the user wants. Anyone with a Windows phone gets missed call alerts and messages from their phone on their PC. Cortana wasn’t available in Japan, Australia, Canada and India before. With the Windows 10 November Update, she is, according to Microsoft’s post today. The operating system now installs with a license key from Windows 7 and Windows 8, solving a big problem for upgraders.

Today’s blog post announcing the Windows 10 November Update focuses primarily on businesses. The company says that this update adds the new Windows Update and Windows Store options for business owners. Businesses can manage Windows 10 devices with the same tools that they use to manage other devices.

When testing the Windows 10 November Update, members of the Windows Insider Program had to do full operating system upgrades on their device. That isn’t the case with normal users. The update installs quickly and seamlessly, just like a virus definitions update might.

The Windows 10 November Update marks the first time Microsoft has released a major update to Windows so quickly after releasing the core operating system. Previously, the company would make stability improvements while not releasing a major update with new features until years after the previous release.