Apple doesn’t guarantee their products against user damage, like dropping it on the pavement and then breaking the display, so we recommend readers insure their devices.

We compared five of the best options for covering an iPhone and settled on AppleCare or SquareTrade. I chose to go with SquareTrade mainly due to previous experience. It’s a good value, if the company comes through for the user. SquareTrade includes accidental damage covering the display on the iPad, and extends Apple’s one year warranty to two or three years. They don’t cover loss or damage due to natural disasters.

SquareTrade makes the coverage available for a minimum of $89 on iPad. 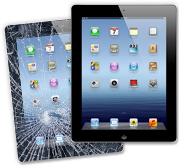 I dropped my iPad mini earlier this month, breaking the screen in two places and bending the aluminum frame. I had to file a claim, and here’s how that worked out:

SquareTrade makes it simple to buy coverage. Click on “Get a Protection Plan” on the main page and a drop down list reveals the electronics they cover. The list includes:

With an iPad, they offer a few options. Select the model and length of coverage, either two or three years. Select a $49 deductible, which brings the coverage down $10, but will cost the user $49 if there’s a claim. We recommend paying the extra $10.

While some SquareTrade plans don’t cover accidental damage like drops, all iPad plans do. When buying a plan for other items, be sure to get the accidental damage, which will cost more than just an extended warranty.

The user must send a copy of their receipt. The site makes gives simple instructions for submitting the receipt.

Items purchased on eBay follow a slightly different checkout process. Look for the eBay link on the checkout page once the buyer selects their coverage.

To file a claim, go to the SquareTrade home page and click on the File a Claim link in the upper right corner. Follow the instructions to file the claim.

The user will select a payment method in the event SquareTrade can’t fix the item covered. I picked PayPal, the fastest way to get paid cash. They will also send a check, or email the user an Amazon Gift Certificate.

It took SquareTrade nearly a full day to respond to the claim. They provided a prepaid UPS label to use to ship the iPad to them. Shipping took a week. They sent the following email once the iPad made it into the UPS system. 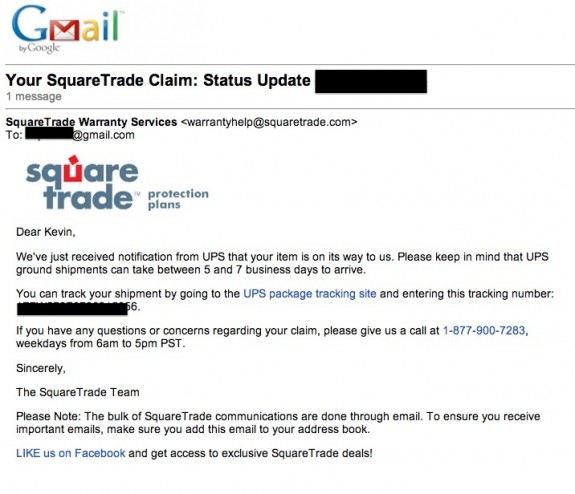 Plan to go without the device for a week to two weeks or more. Because of that, one may wish SquareTrade offered overnight shipping. We understand that this would cut into their profits, but it’s easy to imagine that many users would pay extra to get overnight or 2nd day shipping. I shipped the iPad on January 7, 2013, and received the funds via PayPal January 23, 2013.

SquareTrade communicated the status of the iPad claim well, despite the slow turn around. The only hiccup came in email saying they received the iPad. I checked the site to confirm the status. It still showed the iPad status as in transit via UPS. Which one’s right? 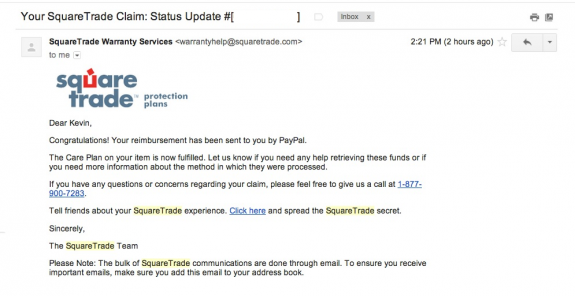 A couple of days later an email arrived that said they would try to fix the iPad. The next email came a week later; it said they couldn’t repair the iPad because the damage was too extensive or parts weren’t available. I’m guessing the problem lied with the latter issue, since it only needed a screen replacement. SquareTrade promised to send funds via PayPal in 2-3 days. The next day $659 showed up in our PayPal account, faster than promised.

The claim process went well with only one complaint. I’m happy that they followed through on the promise to cover breakage due to accidental damage.  However, I wish they would let the user pay extra for overnight, or even 2-day shipping, so that I didn’t go two weeks without the iPad. The one communications glitch was confusing, but minor.

We can recommend SquareTrade because waiting two weeks is better than buying a brand new iPad out-of-pocket or doing without.

Remember that SquareTrade doesn’t reimburse cost of shipping or sales tax. Don’t go with the $89 warranty with a deductible. Pay the $10 and get the full amount of the device if a claim gets filed.