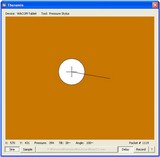 Theremin transforms a Wacom graphic tablet into a musical instrument. Press your pen on the screen and you get sound.

The position of the stylus determines the frequency (Y coordinate) and the pan (X coordinate) of the audio signal generated. The pressure corresponds to the amplitude, and the tilt to the amount of frequency modulation.

In addition to the default mode in which Theremin lets you play a sine wave, you can select any .wav file to use your own sample data. It can be a full guitar or drum loop, or a single cycle of an analog waveform for example. In both modes, a delay effect can be inserted before the audio output.

I tried this out briefly on my Tablet PC and the pen doesn’t quite line up with the cursor. That said, it is a clever musical diversion.