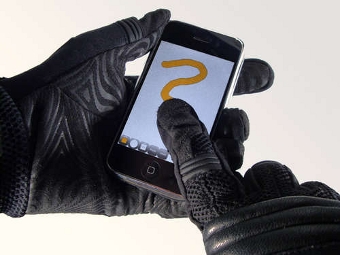 While it’s proven invaluable for responsive touch input, capacitive touch suffers from the fact that it can only recognize direct skin contact. Without some conductive material connecting you to the screen, like the Pogo stylus or a damp sponge, it won’t register. That proves problematic in cold climates, such as a white winter wonderland, when gloves are a necessity. There are special gloves to overcome this, but if you don’t want to spend the bucks, the brainiacs at Instructables have a DIY alternative that’s as simple as a do-re-mi, or more accurately, so (sew), a needle pulling thread.

Yes, apparently making capacitive touch-friendly gloves just requires stitching some conductive thread, like silver-plated nylon, into the fingertips. Looks like anyone who passed Home Ec can do it (I got a B), but I’d still recommend checking out the instructable for the pattern. Great gift idea, BTW. Combines geekery with a homemade touch.