Retail locations of Sprint and Verizon Wireless stores have begun to receive demo and display units of the HTC Arrive and HTC Trophy respectively with the Mango software pre-installed. Neither carriers nor Microsoft have given an exact release date of when the Mango software update will begin to roll out for these two CDMA Windows Phone 7 devices, but given that demo units are appearing with the software update pre-loaded, it could mean that Mango may be coming soon to both devices. 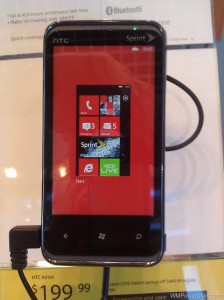 According to a Sprint store manager in a post over at WMPU, retail units are still not shipping with Mango pre-installed though the demo units are beginning to show up with Mango.