Navteq, which is a wholly-owned Nokia subsidiary, has just acquired Trapster, which is a crowd-sourcing service where motorists mark locations on the map where police have speed traps set-up. The Trapstser service is used by 9.4 million people and provide user-generated content on road checks, hazards, and other information. 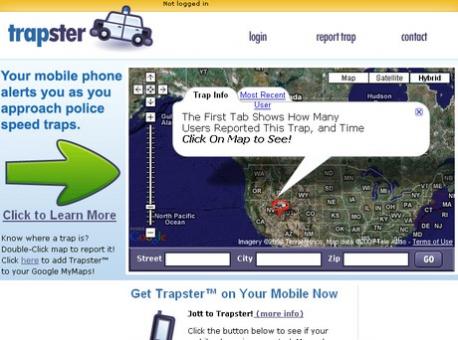 Whether we’ll begin to see more crowd-sourced information from Navteq and, by proxy, Nokia with the company’s Ovi Maps, which is available for free lifetime use on Nokia smartphones, is unclear. However, a Navteq spokesperson has acknowledged that crowd-sourcing is an important component to mapping: “Navteq believes that community-generated data has a critical part to play in location content.”

Other ways that information can come from users, albeit passively, from the mapping world is from traffic data. With Nokia smartphones with embedded GPS sensors and Internet connectivity reporting a user’s location and speed when a user is inside Ovi Maps, the company can compare actual speed to posted speed limits and can tell if there are traffic delays and re-route users to a faster route if necessary.

Details of the Trapster acquisition were not disclosed, though the Navteq spokeswoman did say that “It’s a small deal, even by Navteq standards.”

In the GPS market, there is a company called Waze, with its own app, that works off a free, public Wikipedia-style map repository. The service also allows users to report traffic congestions and the cause of such congestions–such as if the traffic jam is caused by an accident or by road construction–as well as report new roads or alterations in roads–due to road repairs and detours–in real time, and like Foursquare, can reward users who report traffic and road conditions frequently with badges. This means of mapping crowd-sourcing can save the company money as professional drivers would not need to re-evaluate roads every quarter or year, and mapping information would be kept up to date. Maps can be dynamic and changed–if multiple users report on a new road, it can be checked with a local map expert and be changed faster than a traditional mapping company can make the change.

For Nokia, which boasts several open-source platforms–Symbian via Symbian Foundation, Maemo, and MeeGo, it’s unclear if the future of Navteq will go open-source and crowd-sourced. However, the prospect does present exciting opportunities for the future for services and add-ons that can complement and enhance the user experience on the company’s Ovi Maps. In addition to crowd-sourced local speed traps, perhaps local city guides and attractions that are created by natives as an add-on pack, Yelp-style? How about a database of restaurants and businesses that are locally maintained and updated by map users–as restaurants open, they’ll get added and deleted as restaurants go out of business? The Foursquare and OpenTable paradigm to a restaurant database on Ovi Maps may provide tourists and visitors with the best, up-to-date directory of businesses.