Shoppers will be able to play Mario Kart 8, the latest rendition of the arcade racer, at GameStop on May 17th and May 18th. That’s roughly two weeks, before the game’s release for the Wii U.

News concerning the early play sessions surfaced this morning after MyNintendoNews received information about Nintendo loading the game on GameStop’s machines today. Reportedly, a friend who worked at a local GameStop in the area was able to access a company email that confirmed that Mario Kart 8 demos would be available for the retail chain’s customers to play in-store a bit early. Allegedly, users who show up to play the game and place a pre-order ahead of release will receive special posters.

That Nintendo is gearing up for a big push where Mario Kart 8 isn’t a surprise. The company has been sharing details about the game for months, hoping that introducing new in-game weapons for characters and tracks without any gravity at all will get used excited about the game. Mario Kart 8, could seriously boost sales of the Wii U. The console has lagged in sales lately, especially when compared to Microsoft’s Xbox One and Sony’s PS4. The PS4 in particular has already surpassed worldwide sales of the Wii U. That’s despite the Wii U having launched a year before the PS4. 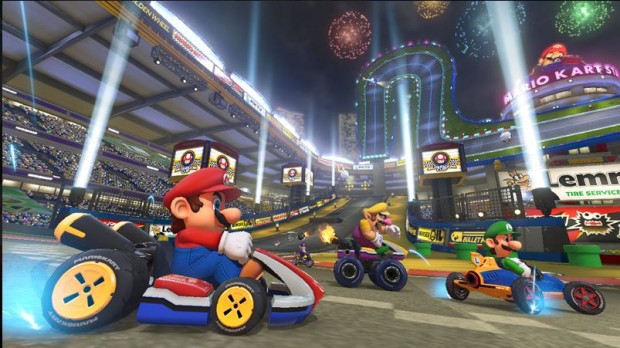 Nintendo later confirmed that more than 2,7000 GameStop locations in the United States would allow users to play Market Kart 8 for Wii U on May 17th and May 18th. The event will last from 12 p.m. to 4 p.m. on both days. Those times will be local and that special pre-order poster will have content on both sides. GameStop and Nintendo are teaming up to offer special giveaways at the event too. Users who can’t be at the events in person will have the opportunity to enter the Mario Kart 8 demo event giveaways by posting tweets with the hashtag #MarioKartMemories.

The zero gravity tracks that Nintendo is promoting will also let users drive on walls and upside down. Understandably, longtime fans of the franchise are excited for Mario Kart 8 for this reason alone, it’s something Nintendo has never tried before despite there being half-a-dozen versions of the game to date. A Koopaling, one of the franchise’s villain’s henchman, a Piranha Plant and Super Horn are all playable characters in this new game.

Nintendo is billing Mario Kart 8 as more “social” than it’s ever been. That because this Wii U-based version allows twelve different users to play directly against each other online. That’s something that hasn’t necessarily been possible in previous versions. Users will be able to share clips they record in Mario Kart 8 with friends and family through YouTube, and the Miiverse online social network that’s available on Nintendo’s consoles.

All told, Mario Kart 8 appears to be every bit the potential console seller as Nintendo hopes it will be. The game is game to propping-up sales of the console over this summer as Nintendo heads to this year’s Electronic Entertainment Expo. The company recently announced that it wouldn’t be holding a big press conference like it has in years past. Instead, it’s opted to hold a special video streaming press briefing for its fans. Those who attend the show will get hands-on time with the games it shows off, however those at home will be among the first to see what Nintendo has in store for the New Year. It’s a strategy Nintendo tried last year to moderate success. At least, it was moderately successful depending on the audience. Nintendo Direct video streams are usually tailored more to the people who already own its consoles. If Nintendo is willing to try the type of event again than it must have been happy with the results of last year’s attempt. Nintendo has already announced that it will supplement this year’s E3 festivities with live streams from a Super Smash Bros for Wii U tournament from the Nokia Theater. Users will be able to play Super Smash Bros for Wii U at their local Best Buy in an event Nintendo is calling Smash Fest @ Best Buy too.

Whether it’ll hold up against Microsoft’s Xbox One and Sony’s PS4 remains a mystery. This is the first Electronic Entertainment Expo to be held since those consoles made it to store shelves. Both Microsoft and Sony are keen to put their best foot forward during the event.

Sony is hoping to maintain its lead in consoles sold by pushing the notion that it alone is responding to what hard-core gamers actually want. Microsoft is hoping to pick up some steam by sharing information about more exclusive games and possibly, more information about the entertainment offerings it offers alongside the Xbox One’s gaming functionality. Recent comments from Microsoft executives indicate that Microsoft could decide to focus more heavily on games than it has any previous events.