Capcom will bring the superhero and video game character fighting game Marvel vs Capcom 2 to the iPhone and iPad next week.

According to TouchArcade, “Marvel vs Capcom 2: Age of Heroes” will come to the iPhone and iPad App Store on April 25. The game features all 56 characters from the arcade, Dreamcast, and PlayStation 2 original game, 28 Marvel superheroes and villains and 28 Capcom characters.

In each match players choose three of those 56 characters to fight another combination of three. Players tag characters out as they lose health, and matches are only won once players knock out all three of their opponent’s characters. 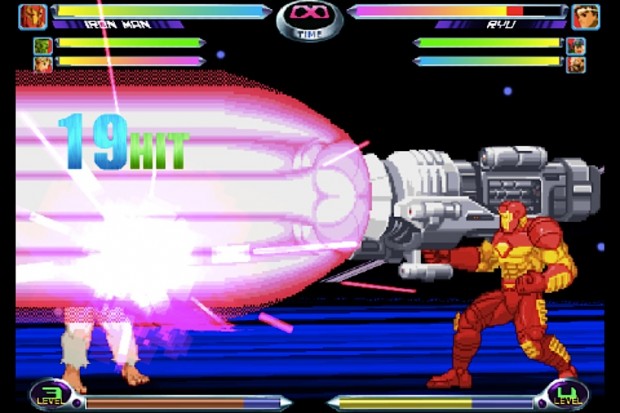 From the screenshots provided we have no idea of knowing exactly how the fighting game will work, unless it requires a gamepad like the iCade. On-screen buttons seem like the natural solution, but the screens show no virtual buttons on top of the characters.

We also don’t know how much Capcom will charge for the game, the PlayStation 3 and Xbox 360 downloadable versions cost $15 each, but that seems a bit too high for iOS. Capcom will most likely price the game similarly to Street Fighter IV Volt which sells for $6.99.

It is strange that Capcom decided to port Marvel vs Capcom 2 to iPhone instead of the newer Marvel vs Capcom 3, but we won’t complain. Marvel vs Capcom 2 is a classic arcade fighting game, and any excuse to play it again is a good one. If the game does use on-screen controls it might be hard to control at first, but as long as we can use Iron Man’s Proton Cannon against Street Fighter’s Ryu, we’ll be happy.