Video game developer 2K Games hasn’t yet announced when we can expect the NBA 2K16 release nor big details, but that isn’t stopping leakers from revealing more about the upcoming basketball game themselves. Some of that leaked information includes details about this year’s cover star and even a surprise new executive to help steer the franchise.

Polygon is reporting that marketing materials made available to them indicate that Spike Lee will help the all-important Career Mode in NBA 2K16. As its name suggests, NBA 2K16 is the unannounced sequel to last year’s NBA 2K15. Additionally, NBA 2K16 will include three separate cover stars, according to the outlet. Polygon has a fairly decent track record with gaming rumors and leaks supplied by sources. 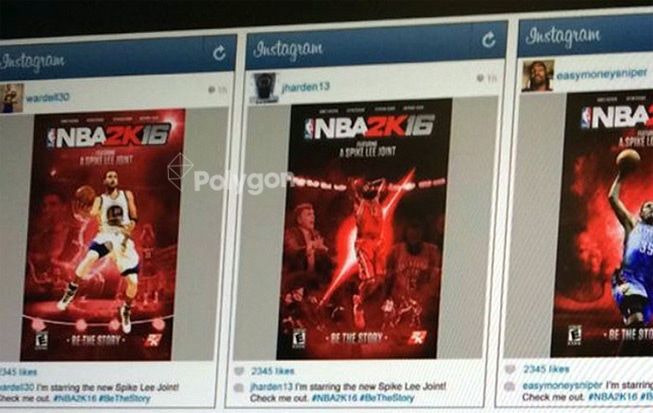 Kevin Durant, Stephen Curry and James Harden will all get their own covers in NBA 2K16. The leaked marketing materials indicate that 2K Games will have harden Durant and Curry all feature prominently in the game. The materials even go so far as to require each of the three famous athletes to inform their followers and fans that they’re starring in the next “Spike Lee Joint,” a phrase Lee likes to use for his own productions. Lee’s name will also feature on the NBA 2K16 cover.

If these leaks are authentic – and the leaked cover images almost confirm beyond a reasonable doubt that they are – then it looks like 2K Games is aiming to give the Career Mode in its flagship sports franchise a much needed boost. Lee’s exact involvement remains unclear, but it’s possible that he’s written some kind of story for the Career Mode. It’s also possible that this is no more than promotional propaganda, a tool to keep the cultural phenomenon that the NBA 2K series has become from fizzling out. Lee is a celebrated director and writer with movies like He Got Game and Do The Right Thing under his belt. Spike Lee is also a huge basketball fan, making him the perfect addition to a roster that’s included rapper Jay Z and recording artist Pharrell Williams.

This week’s NBA 2K16 release leaks comes just ahead of the biggest time of the year for American basketball in general. Yesterday the NBA Playoffs kicked off.

To celebrate, Microsoft, makers of the Xbox One and the Xbox 360 are completely unlocking NBA 2K15. For one weekend only, anyone and everyone with an Xbox One, access to Xbox Live and an Xbox Live Gold account will be able to play NBA 2K16 free of charge. In addition to that, Microsoft is slashing prices on a digital version of the game that includes the in-game currency used in some of its more detailed modes. Anyone who downloads the game is free to earn achievements and play online with their friends and family. Once the weekend is over, the game locks. At that point users can choose to buy a digital version of NBA 2K16 or a disc-based version that they can trade in. Any game saves made from the digital version they download over the weekend will work fine with their final copy.

Presumably, we’ll hear more about NBA 2K16 at this year’s Electronic Entertainment Expo happening in June. In the past, 2K Games has launched new editions in the series during the first week of October.