Warner let us know he’s tired of the games the phone companies play with us on subsidies and pricing. Can’t blame him for that, however, I have only started playing. My first phone was not from a big carrier, and I switched to my iPhone 3G just last year. Thus, I’m still up for playing the game and tweaking the system for maximum savings. First round: subsidies.

Generally, for a two-year contract, U.S. carriers will give you a fixed subsidy per year. In the case of the iPhone and other smartphones with data plans, that subsidy is $200 per year. You sign up for two years, they give you a $400 subsidy. You try to re-up a year early, you only get a $200 subsidy. Seems fair enough to me, but why settle for fair?

As is being widely reported, AT&T lets you have the full $400 subsidy if you re-up after 18 months, giving you a six month re-up period ahead of your contract expiration. Pretty standard, though not explicit, practice among U.S. carriers. So how does that affect you? Check out the table. 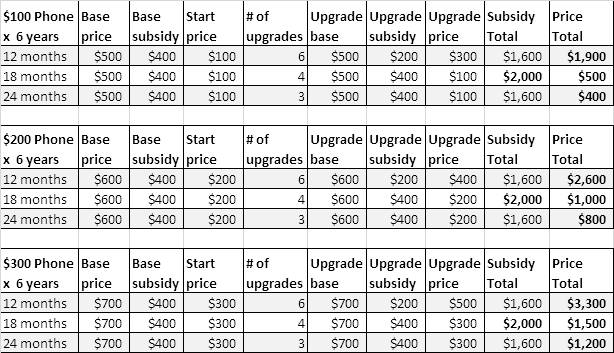 Based on a six-year span of purchasing a new phone at set intervals, starting with the full subsidy when you first sign up, the total subsidy you receive is the same whether you re-up every year or every two years.

But if you re-up every 1.5 years, you sneak in an extra phone subsidy. You do pay a bit more vs. two years, but you get 25% more subsidy vs. 20% higher cost and you get one more phone to sell or re-purpose.

Now look at the huge price jump if you re-up every year. Re-up annually and you get the same total subsidy as re-upping every two years, but it can cost several times the price. Definitely not worth it.

There are other costs to consider of course, such as upgrade fees and taxes, but in general over the long-term, an 18-month upgrade cycle gives you a larger subsidy at a slightly higher total cost.

Second round: last year’s model. Also notice the $100 phone is half the price of the $200 phone while the subsidy totals are the same. Due to that fixed subsidy, the relative savings is much higher for the $100 phone vs. the $200 phone. Seems unfair to compare, but remember, the 8GB iPhone 3G that will be offered at $99 used to cost $199. Same phone now half the price.

Assuming Apple keeps to their annual schedule, we can expect to see the 16GB iPhone 3GS, currently $199, available next year for $99. True, there will also be a hotter, newer iPhone model out, but if your goal is to save money, the cutting edge is not the zone for you. The cycle is based on the current iPhone schedule, but I would expect its key competitors, such as the G1 and Palm Pre, to maintain a similar pace.

So there you go: re-up every 18 months and settle for last year’s model to maximize your subsidy and get the most phone for your buck. Again, this is just a general breakdown. Other costs apply, but I bet more tweaks can be found too. Feel free to share in the comments.

Update (6/9/2009 2:14PM ET): Reader Jonathan has reminded us of a fun twist on the game: cancel and renew. Basically, if you cancel your contract and pay the $175 early termination fee with a $5 discount per month for “time served”, which works to $115 at 12 months, then sign up new, you get a better deal than a straight upgrade. I have created an updated table to reflect this, as well as include the $18 upgrade fee vs. $36 new activation fee. As you can see, this nets you a bigger subsidy, though at a less favorable rate compared to 18 month upgrades. And yes, it is dumb that they don’t just give you a better option than this at the get-go. 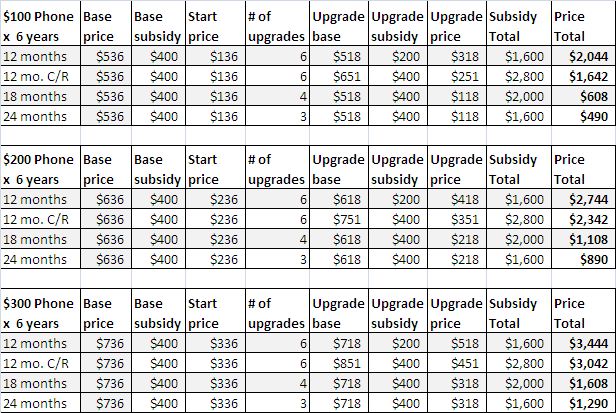