In the craziness that has been my schedule the first part of this year, including setting up Vista on my X60 and attempting to get the same done on the Asus R2H, I’ve been using Firefox as my primary browser. It just out shines IE7 in too many areas, including speed. Prior to making the move (or I should say experimenting with the various betas and release candidates of Vista) I used to rely on Maxthon as my primary browser. Maxthon didn’t make it on to the initial installs of new systems or a variety of reasons that aren’t really important. Well, just recently I decided to go back and give that old friend a re-look. Glad I did. 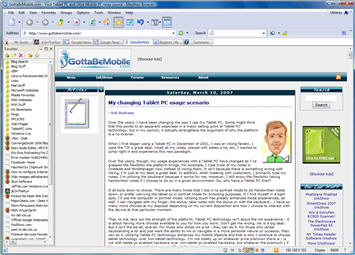 I’ve always liked Maxthon’s tabbed browsing better than either Firefox or IE’s. That still holds true. In addition, the included mouse gestures work great with the pen, and I like using them better for browsing with a pen than the Grab and Drag extension for Firefox, or the Vista Flicks for the pen in IE. Maxthon’s mouse gestures just work easier for me for some reason.

I’m also noticing that Maxthon renders pages much quicker than the latest versions of Firefox, which is also a bonus. Although I use other tools for RSS feed reading Maxthon 1.5 doesn’t handle them as elegantly as the other two browsers. But perhaps that will be something in a future release. The next version of Maxthon is in beta, but I’ll stick with Maxthon 1.5 for now. It is just a very pleasant browsing experience on my Tablet PC.