The hit mobile game Clash Royale was released around the globe back in early March, and since then we’ve seen a few big updates arrive. However, more changes are coming in a Clash Royale update on May 3rd to fix some issues and frustration players are experiencing. Double the rewards from Crown Chests, triple the donations, cheaper epic card upgrades, game-play balance and more.

Clash Royale is a spin-off of Clash of Clans, one of the most popular mobile games of all time. Using similar troops in a real time strategy and card collecting game, with a very fast pace. It’s extremely fun, but also very frustrating when you lose 8 rounds in a row. Not to mention the game is slowing to a crawl for many who started playing back on March 2nd.

Many players, myself included, have started to notice the game slowing down a lot now that we’re reaching Arena 5-6. Rare and epic cards are hard to come by, upgrading is nearly impossible without spending real money, and the game is starting to lose some of its appeal. As a result, Supercell has a big Clash Royale update coming in early May with lots of changes. Here’s what gamers need to know, as well as the just confirmed release date. 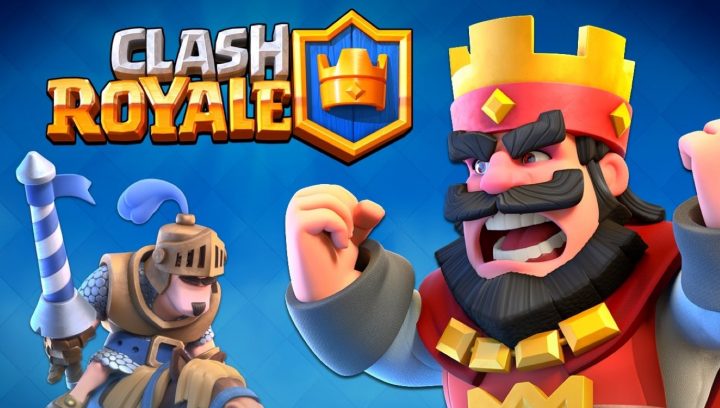 Clash Royale isn’t a game where players simply save up and upgrade or unlock different troops to attack and battle with, like Clash of Clans, and instead they must be earned. It’s all a part of a lottery system with players getting two “Daily Chests” with cards (troops) inside, which allows us to get more troops, upgrade, and get better.

Chests are also earned by winning matches, but what troops are inside any card is a complete mystery, and luck of the draw. While that’s fun, it’s also very frustrating when everyone you face has a card you don’t, which results in a lot of losing battles.

Some players have to wait forever to finally get the Witch, or upgrade the Baby Dragon, and once you finally get the card most players probably don’t have enough gold to even upgrade them. Things are very unbalanced around Arena 6. Reports all over forums and Twitter state the same, with users complaining that game-balance changes are severely needed.

Supercell has noticed a lot of these problems, and are working hard on a fix. They’re also slowly improving the game and want to add tournaments, similar to Clan Wars, live streams of battles instead of only replays, and give players more reasons to keep playing rather than uninstalling this frustrating but fun game. 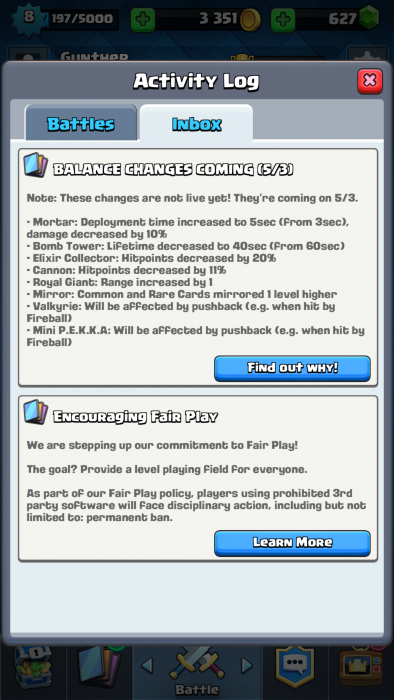 Multiple recent posts over at the Clash Royale website confirm an important update is coming soon, scheduled for early next month. Which means if you can wait it out, in May the game should be a lot better, speed up, and get more exciting. Here’s what you need to know about the May Clash Royale update.

Update: This afternoon Supercell confirmed the big update will arrive on May 3rd, and it will have a bunch of other fixes not mentioned below. Like slower deployment of the Mortar, shorter lifespan for the Bomb Tower or Canon, weaker Elixir pumps, and other changes to even out play. The image below is what’s being changed, and everything else detailed below will also be making its debut.

One of the best features in Clash Royale is the option to fight other players in your clan. This allows players to test new decks or strategies without losing trophies in multiplayer, and it’s also how many clans have been hosting tournaments all over the web, Twitch, and other outlets.

Supercell is adding a “live spectate” mode to friendly battles, which will allow clan members to watch others fight in real-time rather than only the replays. This will be a welcomed addition, and help make tournaments better than ever.

This should make tournament events more exciting, more interactive, and let everyone watch the attacks in real-time. We have something similar in Clash of Clans for Clan Wars, so it was only a matter of time until this came to Clash Royale. That isn’t all that’s changing for tournaments, but more on that below.

Perhaps the biggest news that everyone will be excited about for the May Clash Royale update is in regards to chests. As we all know, the chests just don’t have enough troops, and the game is starting to get slow, frustrating, and expensive for anyone that really wants to play at high levels. 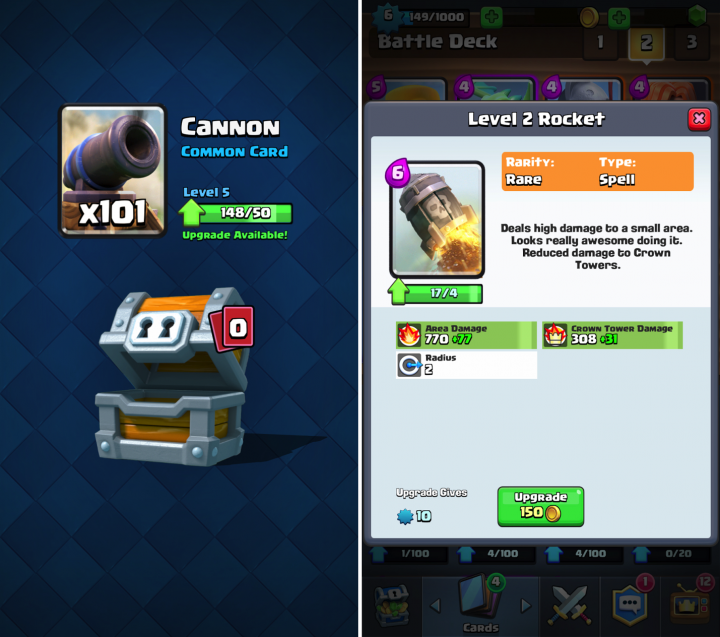 Chests Rewards will DOUBLE after the update. Yes!

After the May Clash Royale update Crown Chests will offer double the rewards. As in twice as much gold, more gems, and double the amount of cards available. This is huge. The single best news since the game was released.

This will make grinding out those upgrades less of a hassle, and getting the crown chests more worthwhile. Keep in mind though, this isn’t for all chests, and only for the Crown Chest which is earned once a player gets 10 towers in multiplayer battles. The other chests will stay the same, sadly. Now I just need more gold to complete the nearly 25 upgrades waiting on me earning more money. I won’t spend real cash.

Another problem is donations. While it’s nice that clan members can donate cards to help us upgrade troops, it still takes far too long to earn 200+ cards and upgrade most troops. Double the rewards will help, and speed up the game, but we’re also about to get a lot more donations from Clan members too.

The donation system will improve and increase as players advance and reach higher level Areans. Making it more important than ever to win battles, earn trophies, and get more donations.

As shown above, after the May update donations will get increased. We’ll now be able to request 30 common cards and 3 rares. Rather than one rare, and 10 commons. Users will also be able to donate six common cards, instead of only two. However, rare will still only be one donation per request. Plus, who wants to donate three rares anyways? Not me.

And last but not least, Supercell is making some important changes with tournament rules to make gameplay more fair. Now many don’t do tournaments, but for those that do, you probably know that Legendary cards are severely overpowered in tournaments.

Supercell confirmed that in regular multiplayer they are fine, but in Tournaments they are too powerful. Instead of lowering them though, the company will simply allow for higher regular cards to fight against Legendary cards. 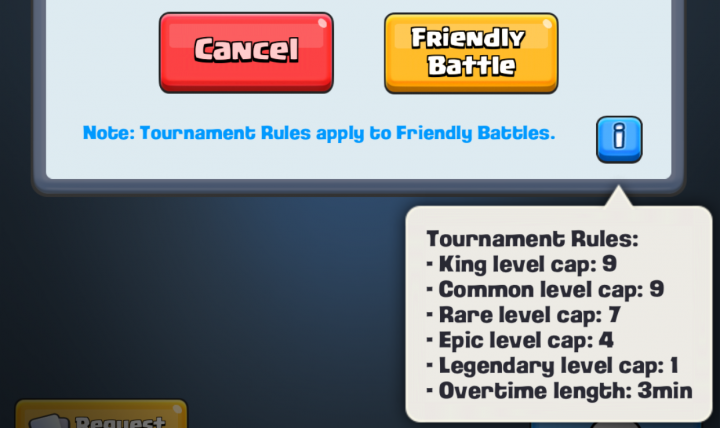 We’re not sure if this is the best route, as legendary cards can still absolutely dominate. That said, almost each troop shown in the screenshot above is 1-2 levels higher, which should give legendary cards a harder time in Tournaments, and hopefully improve or balance gameplay.

Another big change coming in early May that everyone needs to know about is in regards to Epic Cards. Most current players don’t have Epic cards up last a few levels, but once you get to level 7, it costs 300 cards to get an Epic (like the Prince, or Baby Dragon) to level 8. However, after the early May update it will only cost 200 cards.

Legendary cards will also see a similar drop. This is to speed up the upgrade process, make levels more reachable, and balance gameplay at the top. Those who currently have level 8 Epics will get a gem refund for the 100 cards they lost, now that everyone else gets to upgrade earlier.

According to Supercell all of the changes mentioned above, and probably more, will be coming in the next update. That is now officially scheduled for May 3rd, which is early next week.

Once it arrives gameplay will be more balanced, epics will be easier to upgrade, some players will have free gems and higher epic cards, and Chrown Chests will earn double the rewards. Will this keep you playing Clash Royale, or is it getting old already? Drop us a comment below.