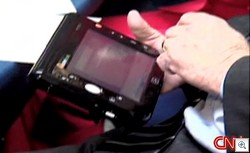 There’s nothing like making fun of politicians and their ridiculous comments about computing on ““the GoogleÃ¢â‚¬Â or ““the InternetsÃ¢â‚¬Â or ““a series of tubes.Ã¢â‚¬Â At times it does make you wonder, and in fact, these days it is an easy target. But in this year’s US election, and the preceding primaries, some are paying more attention to the candidates computer savvy as they are making choices. Earlier this year, TechCrunch ran a Tech Presidential Primary seeking readers’ views on their choices for the next Tech President, and then made an endorsement in both the Republican and Democratic primaries. Intriguingly enough the TechCrunch endorsement picked the two candidates, John McCain and Barack Obama, who are now running in the general election.

Even so, John McCain has taken some hits for saying that he is ““computer illiterateÃ¢â‚¬Â, but in this CNN report slamming him for that (and politicians in general), there are a couple of shots of him trying out a TabletKiosk eo UMPC. Check it out.

So, here’s a question for you. How important is a candidate’s tech literacy for you in making your political choices? In answering this, let’s keep this high-minded here. We’re not interested in flame wars about one candidate or the other, but want to know if a candidate’s tech knowledge, or lack thereof, affects your choosing.

Thanks to Gail Levy for the link.