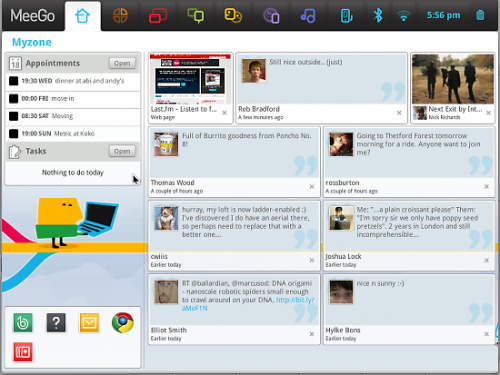 The first version of MeeGo, the mighty gestalt OS formed by Intel’s Moblin and Nokia’s Maemo, is now available for developers and geeks to try out. This gives developers a chance to get cracking on apps and geeks a chance to be geeks. Speaking of which, Brad Linder already has a video of it in action up at Liliputing.

This 1.0 version of MeeGo for netbooks is designed to run off a flash drive, allowing folks to try it without risking their production system. This also demonstrates the tiny footprint of the OS, coming in around 800MB. As Brad demonstrates, the light system runs very fast despite being on an external drive. It features a tabbed interface that partitions the screen views instead of using the window-based interface we’ve grown accustomed to using. The intent of this design is to maximize use of the small screen of a netbook, which is a tight squeeze for multiple windows.

Still too early to say if MeeGo will be a crowd-pleaser, but I love that they’re tailoring the interface for the screen size and have it stripped down to such a tiny package, ideal for the smaller storage and slower processor of netbooks. Lot of grays in the interface at this point, and the icon-only top bar strikes me as needing verbiage, but cosmetic changes aside, it’s a good start.