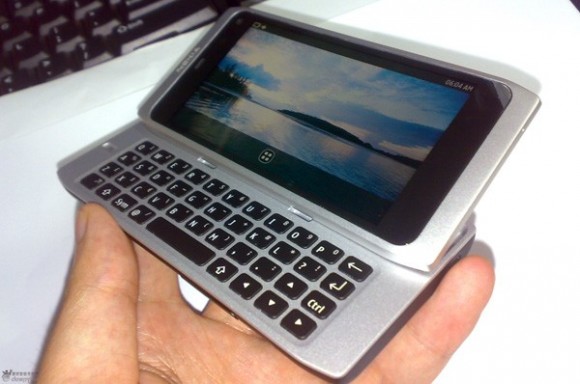 Unconfirmed reports are circulating that Nokia may be releasing its first MeeGo-powered handset in the form of the Nokia N9 at this year’s Mobile World Congress in Barcelona come this February. The MeeGo operating system has been jointly developed my Nokia as it had scrapped its Maemo OS along with Intel when the latter decided to fold its Moblin OS into the MeeGo project, which is based on Linux.

The N9 is rumored to take on a similar form factor as Nokia’s E7 business-class Symbian-powered handset, utilizing a large display and landscape-oriented slider to reveal a full hardware keyboard.

The N9 is said to be powered by an Intel Atom 1.2 GHz CPU, according to Engadget, making it the fastest Nokia smartphone to date based on quoted clock speed. It’s unclear what the battery life and performance will be–Nokia’s Symbian-powered handsets have had a great reputation for battery life.

The Finnish phone-maker has been dropping hints that its MeeGo phone may encompass a different UI paradigm to create a new user experience than what is seen on the market today. In previous statements, the company is exploring a different beat, similar to what Microsoft had done with its Windows Phone 7 platform. Moreover, with the company looking towards the Qt development environment to bring cross-compatibility between its disparate MeeGo and Symbian OS environments, we’ll hopefully see more apps being developed and created for Nokia’s phones.

If Nokia is successful with its MeeGo push, perhaps in the higher-end phone segment to compete with the likes of iOS and Android, then Intel will surely benefit; Intel has had trouble trying to push adoption of its Atom-based processors into smartphones in the past as many smartphone-makers are adopting ARM-based CPU designs for handsets. MeeGo is also a vital push for Nokia as the phone-maker has had difficulties trying to penetrate the U.S. market in the past with its Symbian handsets. Strained carrier relationships have led Nokia to cancel the X7 launch on AT&T, which leaves the company’s high-end smartphones unsubsidized at a higher cost for adoption for consumers, albeit contract-free. As a result, in the mobile phone space, a lot is riding on MeeGo for Nokia and Intel, both heavyweights in their respective industries though trying to push into a growing market segment.

The MeeGo-powered N9 will combine the best hardware from Nokia’s excellent N8 and E7 handsets. The N9 will have the former two handsets’ great material selections, amazing build quality and design. From the N8, the N9 will carry-on the 12-megapixel camera (that the E7 eschewed in favor of the hardware keyboard), and it will combine the multimedia-prowess of the N8 with the business-class keyboard of the E7.

Though it is speculated that an announcement may be made at Mobile World Congress, Nokia will not have a booth or an official presence at the show. It is likely that the phone-maker will have a side venue as an adjunct to show its presence. The company is likely to experience competing announcements from HTC and from Samsung in the tablet and smartphone segments.